Who Could Say No to a Bilingual Comic Called "Lowriders in Space"? | Bitch Media

Who Could Say No to a Bilingual Comic Called “Lowriders in Space"? 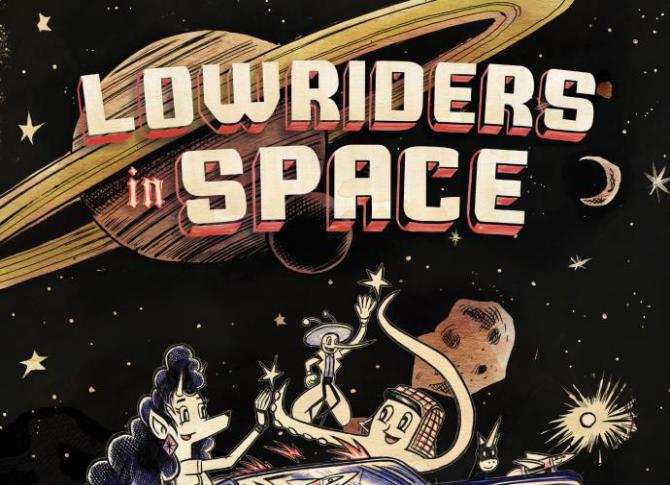 Lowriders in Space is a new comic that’s just as much of an adventure as it sounds like. Drawn entirely in blue, black, and red ballpoint pen, the comic looks like a kid’s dream sketchbook—a fun, intricately illustrated story whose pages are filled with hidden jokes, creative characters, and a mix of Spanish and English dialogue. Published in November by Chronicle Books, the book’s plot is wonderfully silly: When three underpaid mechanics decide to build the car of their dreams, they wind up rocketing into space.

The project that was Lowriders in Space began when author Cathy Camper started thinking about the need for more diverse books for kids. In 2005, Camper was working three part-time jobs, including a gig doing outreach at low-income housing for the local library. The kids who would show up to check out books were a multi-cultural bunch, many of them fluent in both English and Spanish. The library had books in Spanish and books in English, but not many that blended the two languages in a way that reflected the Spanglish of her patrons. Camper noticed that they also didn’t have a lot of books for kids that starred characters who weren’t white and suburban. Of best-selling young adult books, only about 15 percent have main characters who are people of color. Camper started to think about how cool it would be to have a bilingual book on hand that these kids and their parents would want to devour.

“It was like a daydream that grew,” says Camper. “I wanted to have a story that was about them and not about drugs or violence, but just about people.” The books that did fly off the library shelves, Camper says, were any and all books cars. 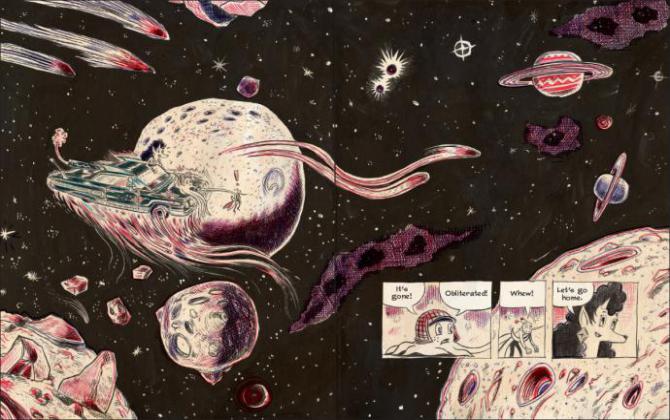 An interior spread from the finished comic has the feel of an epic landscape drawn on notebook paper.

Camper got so into the idea of doing some kind of book about cars that she decided to attend a lowrider show in Portland. She was blown away. The huge convention center was packed with kids and their parents hanging out together.

“You could count on one hand the number of white people,” says Camper, who is Arab-American. Hundreds of families were hanging out, checking out tricked-out cars, but Camper realized as she walked around that there weren’t any books for sale at all. A lightbulb clicked on in her head. “As a librarian, I was thinking, ‘This is the perfect connection!’”

Having previously written a nonfiction book about the science of prehistoric bugs, Camper had some experience putting together a kid’s book, but had never written a comic. She contacted artist Raul III and sent him her rough ideas for the book. He quickly wrote back saying, “This is the book I wanted to read as a kids.” The next day, he was drawing up character sketches. 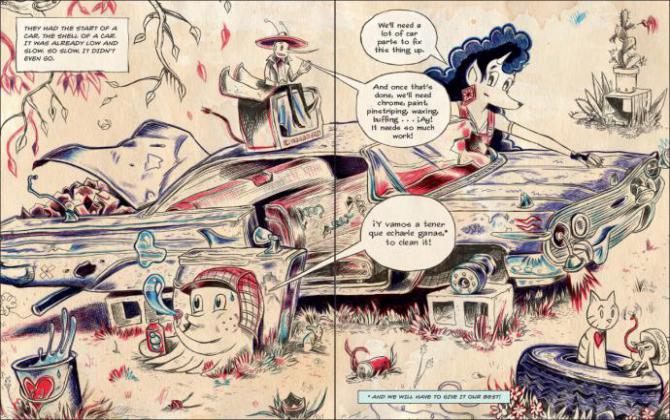 The book’s three main characters started with just names: Elirio Malaria (“It’s just fun to say!” explains Camper) is a mosquito with a bad reputation and a talent for detail work. Premiere car-washer El Chavo Flapjack Octopus is based on a real-life cephalopod and champion mechanic Lupe Impala bears the name of a popular lowrider car. She’s my favorite character—a straightforward overall-wearing girl who can fix any heap up junk up into a flashy car. She’s a nod to Maggie the mechanic of Love and Rockets, but she’s not sexualized or romantic at all.

Every character in the book is a critter, in part to try and circumvent typical pop cultural portrayals of Latino culture. “I didn’t want to be in any way making fun of cholo culture or stereotypes,” says Camper. Instead, the book is meant to be an appreciation of the creativity of Latino culture, a book that bilingual kids can bring home to read with their parents.

Sarah Mirk is Bitch Media’s online editor. She knows nothing about cars, but a lot about comics. 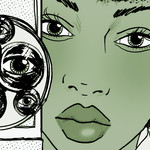