Who Thinks Race Isn't a Big Deal in Ferguson? 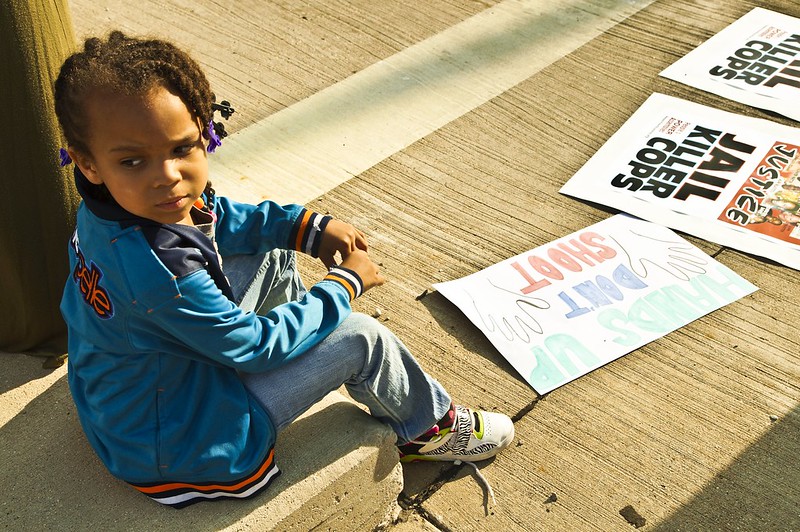 A child takes a break during an anti-police brutality protest this week in Milwaukee. Photo by Light Brigading.

The Pew Research Center polled 1,000 Americans in the past few days about the police shooting of Michael Brown in Ferguson, Missouri. When the pollsters asked about what the shooting reveals about racial issues in America, the divide was stark: 80 percent of black respondents said the shooting raised important issues about race. Meanwhile, 47 percent of white Americans thought race was getting too much attention. It’s important to note that this survey talked only with people who had heard of the issues in Ferguson—it leaves out people who have ignored the news entirely. 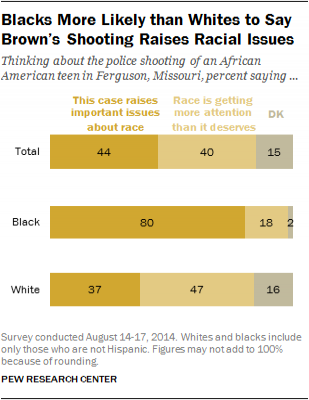 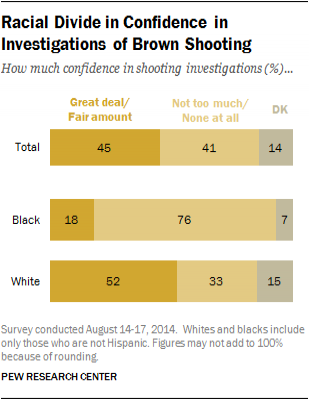 The numbers are shocking—and they help us recognize that this is one more example of how white people have the privilege to ignore race. Because we live in a culture where whiteness has historically been considered the norm, white Americans can more often than not wander through our days and lives simply not thinking about race. That’s acutely true when it comes issues around policing and justice: A study released this spring showed that nearly half of all black men in America have been arrested at least once by age 23. When black men’s chances of being arrested are as good as flipping a coin, it’s impossible to ignore the role race plays in shaping our justice system. New York City’s stop-and-frisk policy has been another clear example of this reality. New York State Senator Eric Adams testified that the NYPD’s aggressive stop-and-frisk has disproportionately targeted black and Latino men because “he wanted to instill fear in them, every time they leave their home they could be stopped by the police.” To say that “race gets too much attention” is a notion founded on the false idea that race doesn’t really impact peoples’ lives that much in America.

This new poll shows how white and black Americans see the world with two different lenses. Just like stop-and-frisk was just not an issue for many white New Yorkers, nearly half of white Americans can look at this shooting, shrug their shoulders, and say, “What’s the big deal?” That perception not only colors Americans’ reactions to the shooting, but inevitably influence media coverage of the shooting and protests—especially at outlets that are trying to appeal to white demographics. It’s rare that news stories show this shooting as part of a systemic problem. Michael Brown’s death is often presented as a rare, unfortunate incident. But as Melissa Harris-Perry took time to point out on her MSNBC show this weekend, it’s not actually that rare at all. “From 2006 to 2012, a white police officer killed a black person at least twice a week in this country,” Harris-Perry said. She began her show by reading the names of numerous unarmed black men who have been fatally shot by police in the past decade. 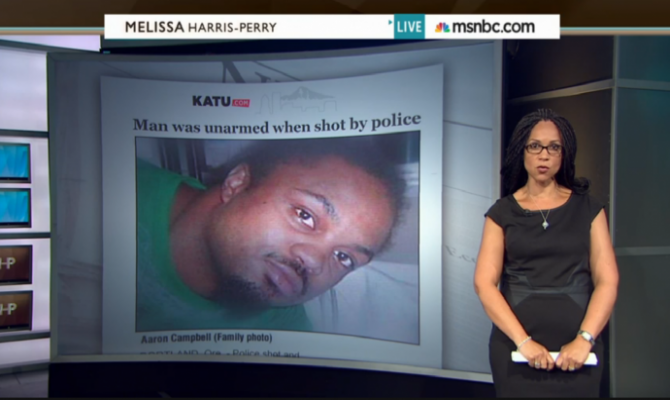 It’s impossible to watch her show and not recognize that these deaths have a racial component.  But the racial split is also clearly a political divide: The poll shows that 68 percent of Democrats think the shooting raises important issues about race, while numbers are flipped for Republicans, with 61 percent of GOP members saying that race is being talked about too much.

As Aura Bogado points out at Colorlines, this isn’t just a white and black issue. The poll also shows that 25 percent of white people said they were following news from Ferguson “closely,” but only 18 percent of Latino respondents were doing the same. “Non-black Latinos have a long way to go in confronting our anti-black biases. Paying attention to what’s happening Ferguson would be a good start,” writes Bogado. Despite the relatively low percentage of Latinos following this story, several national Latino organizations have been quick to organize in support of police reform after the shooting. The League of Latin American Citizens is calling on Congress to review its policy of distributing military weapons to local police and Hispanic Federation President José Calderón issued a statement calling for a “swift, just investigation to determine how another unarmed Black young man was killed by those who are given the solemn responsibility to protect and serve all of us.”

In this excellent call to action, writer Janee Woods points out how, on social media, it was mostly her friends of color who discussed the Ferguson shooting; though protests and police backlash took place night after night, her white friends instead actively posted news about the ice-bucket challenge and Robin Williams’ death. Woods advises white people to, among other things, read up on America’s racialized history in order to understand why race absolutely plays a role in both Brown’s shooting and the police reaction to protests. “Michael Brown’s murder is not a social anomaly or statistical outlier. It is the direct product of deadly tensions born from decades of housing discrimination, white flight, intergenerational poverty and racial profiling,” writes Woods.

Related Reading: We Are NOT All Trayvon Martin.

I'm wondering how people who think this doesn't raise important issues of race would react if they read these poll results.

It makes sense if racism is a problem that white people tend to deny it.

But if racism isn't a problem, why do black people tend to think it is?

I know i'm not the first person to ask these questions. That's kind of the problem, i think. When we deny reality, we don't ask questions or consider evidence. We've already decided what we believe.

So my next question is-- how do we decide what we believe?

I made and posted this video a few months ago to respond to ice bucket challenge through the Ferguson & race issues. It got very few shares unfortunately, and your article here probably explains why - not many of my white friends had an interest in sharing it... in having a conversation about race.