Why Are 70 Percent of the Most Popular Podcasts Hosted By Men? | Bitch Media

Why Are 70 Percent of the Most Popular Podcasts Hosted By Men? In my role artistic director of the Third Coast International Audio Festival, I’ve noticed something that bothers me. It’s nothing new, it’s fairly obvious, and it deserves your attention. It’s the lack of female hosts in the ever-widening world of podcasts.

According to the widely-used podcast-delivery phone app Stitcher, as of mid-February, 2013, out of the top 100 podcasts in their system, 71 are hosted by men (many by two or three men), 11 are hosted by women (of which three are just 60 second long podcasts), 9 are co-hosted by a man and woman, and 9 are either NPR or BBC news aggregation podcasts with alternating hosts and reporters, or it’s unclear who hosts. The statistics for iTunes results are similar.

As a radio addict, I generally keep up (or try to) with what’s out there in the audio cosmos. I’ve long been aware that male-hosted podcasts out-number women-hosted podcasts. But the actual numbers floored me. They should alarm you, too. The statistics point to a disappointing truth: that podcasting, hailed back in 2004 as a “revolutionary” new tool for freedom of expression and endless creative opportunity, quickly copied the same gender stereotypes and realities that traditional broadcasting environments have demonstrated throughout history.

Of course I’m not the only one who’s noticed this, or who thinks about it. Nick van der Kolk (Snap Judgment, Love + Radio) posited the question via Facebook back in 2011, and Ashley Milne-Tyte (The Broad Experience) wrote about it last year, just to point to a couple previous public ponderings. But it’s an issue that merits continuous noise, so here’s an attempt to bang on a few more pots and pans about the situation.

I asked two dozen people (half women, half men) in the extended Third Coast community of producers, public radio decision-makers and podcast hosts to weigh in on the topic.  A little more than half responded. Of those who did respond, approximately 85% were women. What follows are my own thoughts, combined with observations and opinions from those who responded to my questions. These anecdotal experiences show a few main factors contributing to the egregious gender imbalance of the podcasting world.

2. Podcast Have Sad Economics.
Unless they’re born of already-existing media outlets (i.e. resources with business plans), most start-up podcasts bring in very little (if any) money and demand super-human efforts to be produced regularly. Many women who I spoke with mentioned they simply couldn’t afford these terms—and if they could somehow manage not getting paid for tireless devotion to a project, they couldn’t squeeze the hours needed into their already personally and professionally over-burdened days. Hillary Frank (The Longest, Shortest Time) pointed out that by the time they’re experienced enough to understand what producing a top-notch podcast takes, women have often started, or are soon planning to start, a family. This seriously hinders time and energy for any other demanding endeavors—no matter how supportive and helpful one’s partner is. This challenge clearly affects women differently, and more tangibly, than men.

Benjamen Walker (Too Much Information)—one of just three men who responded to my questions—answered in one frank sentence: “Women aren’t stupid enough to slave away on a podcast for no money.”

3. Hosting a Show Requires Takes a Big Ego.
Objectively: There’s a certain amount of ego that goes along with being a host (of anything.)

Subjectively: Men seem more comfortable with feeling entitled to claiming center stage, marketing their shows, and asserting knowledge, expertise, wisdom, and opinions, than women. Men are also socialized more around technology, electronic equipment, recreational gadgetry, and are therefore more fluent in using these tools to make things like… podcasts. Women are more likely to work behind-the-scenes on a male-hosted podcast, or produce NON-hosted podcasts, than to insert themselves as hosts.

Objectively: In an age where social networking and DIY marketing can systematically decide the success/failure of endeavors big and small, this is a huge liability for women-hosted podcasts.

Obviously, these three points by no means collectively explain the relative lack of WHPs, but I hope they do begin to unpack some of the factors behind the dynamic.

So now what? Good news: Every single person reading this can do something to support women-hosted podcasts. One of the biggest hurdles to women being recognized more regularly as successful podcast hosts: most podcast listeners simply don’t know about very many women-hosted podcasts. Interest is contagious, so if you intentionally seek out a couple podcats and listen to them, and like them, and write positive public reviews, and share and tweet and tag and point… you’ll help attract more listeners to those podcasts, and momentum will build.

Beyond listening to shows, you can offer encouragement to women who are interested in podcasting—the support of friends and colleagues means a lot. And if you’re a woman out there who has toyed with the idea of starting a podcast, but have not yet made the move… get busy! There are so many of us waiting to hear your work.

For futher listening, an incomplete list of great women-hosted podcasts:
- Destination DIY (whose host Julie Sabatier is pictured above!) - This podcast and independent radio show features discussion of DIY topics from craft projects to gender to abortion.
- Strangers (Lea Thau) - A podcast about the people we meet, the people we become, and the places we go
- Decode DC (Andrea Seabrook) - Deciphering Washington’s language and procedure so you can focus on what matters- Life of the Law (various hosts/all women) - A 360 degree view of our legal system- Curious City (Jennifer Brandel) -  Curious City is a Chicago-based news-gathering experiment designed to satisfy your curiosities. - The Broad Experience (Ashley Milne-Tyte) - A conversation about women, the workplace, and success- The Longest, Shortest Time (Hillary Frank) – The truth about early motherhood- Tiny Spark (Amy Costello) - Igniting debate about the business of doing good- DTFD (Julia Barton) - Julia talks about all manner of things, while doing the dishes- Grammar Girl (Mignon Fogarty) - Quick and dirty tips for better writing- Girl on Guy (Aisha Tyler) - A show about art, culture, booze, comedy, family, physical injuries, psychological bruises, action movies, rock music, ninjas, zombies, failure, success, sacrifice, video games, and blowing shit up.- The Other Woman (Ruth Barnes) – The finest place to learn about new music by women across the genres from around the world.
- Vox Tablet (Sarah Ivry) A new listen on Jewish life- Slate’s Double X Gabfest (Noreen Malone, Hanna Rosin, Emily Yoffe) - Slate’s weekly women’s roundtable.- Tabled Fables  (Amy Kraft and Sophie Bushwick) - A podcast about fairy tales- BBC Women’s Hour - 50+ year old show offering a female perspective on the world- Lost Treasures of the Black Heart  (Josie Long) - A comedy podcast dedicated to uncovering obscure facts, unknown gems and remembering unsung heroes
- The Hackney Podcast (Francesca Panetta) - A creative show exploring various issues in the London borough of Hackney.
PLUS: Bitch Media has several podcasts and will be re-launching the Popoganda podcast this spring!
Any other favorite podcasts? Add them to the comments!

The article was originally posted on Transom.org, where you should also go give a shout out to your favorite podcasts.

33 Comments Have Been Posted 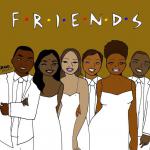 by Patricia Romero
Today we are reading about the women who created #BlackLivesMatter, Julio Salgado, and Hillary.