Why Do We Have More Female Scholars, But Few Public Intellectuals? | Bitch Media

Why Do We Have More Female Scholars, But Few Public Intellectuals? When I think of Dr. Brittney Cooper, Joan Morgan, Dr. Melissa Harris-Perry, Dr. Tanisha Ford, Dr. Treva Lindsey and Dr. Kaila Story, I imagine the intellectual ancestors smiling down on them. These women scholars are progressing public discourse through their academic work. Their scholarship ranges from hip-hop feminism to fashion as political resistance, but their influence within and outside of the confines of the academy makes their research accessible to those without advance-level degrees.

Though the ladies listed are members of a growing chorus of women intellectuals, a three-year study conducted in Canada found male professors outnumber female professors in media coverage and overall reach. Shari Graydon, former president of Media Action—a non-profit organization that encourages gender equity in media—presented her findings at the Worldviews conference in Toronto.

Graydon said there’s a 4-to-1 imbalance within the public intellectual tradition. Researchers examined the male-to-female ratio in major newspapers, radio programs and television talk shows. They found an extensive disparity between the voices represented through these outlets.

“On one level that’s not so surprising,” Graydon said. In proportion to their numbers, women academics were underrepresented even in the expert databases of their universities. Furthermore: “They are often unwilling to come forward.” There were also pressures on women’s time, which needed to be divided between work and, for instance, family responsibilities.

But the problem went deeper. What Graydon had been told by journalists – and this had been borne out by interviews with and surveys of 400 female scholars across Canada – was that when approached for comment on an issue, women were far more likely than their male counterparts to say: “I’m really not the best person.”

“The truth is that male scholars may also feel pressures, may not feel that they are the best person to respond to a particular journalist’s question. But a male expert will rarely if ever say the words, ‘I’m not the best person’,” said Graydon.

“Not because he always thinks that he is, but because he knows that he knows more than the majority of readers or listeners or viewers and, yes, he has a PhD, he has 10 years’ experience in the field, and yes, of course he will comment.”

Both male and female scholars were understandably worried about their words being taken out of context, Graydon added. “They are all concerned about not being able to put complex, nuanced issues into quotable sound bites. They are concerned about being seen as not serious, as doing scholarship that is not popular – all of those things affect men as well.”

However, female scholars were subjected to what Graydon called a “gender push-back” that men do not experience. Operating in a space where they are judged against “graphically and surgically enhanced images of women”, women scholars were judged and found wanting, even if only on a subconscious level.

Frequently, the feedback in online comments was “specific and vicious, and often women scholars are just not willing to go there and subject themselves to that kind of attack.”

Graydon’s current initiative, Informed Opinions, aims to lessen this gap by training women intellectuals in media. This will guarantee better opportunities and more exposure for their research.

“We encourage them when they get a phone call from a journalist to start here: ‘I’d be happy to try to help’.”

“Because there is nothing about this statement that says I believe I am the best person; it just opens the door to a conversation in which they may be able to add value.”

The Internet also presents an excellent platform for women scholars. Daniel W. Drezner is a professor of international politics at the Fletcher School of Law and Diplomacy at Tufts University. He has studied the decline of the public intellectual tradition, but sees a resurgence of brilliance emerging in the digital landscape. Drezner writes:

For academics aspiring to be public intellectuals, weblogs allow networks to develop that cross the disciplinary and hierarchical strictures of the academy – and expand beyond the academy.  Rebecca Goetz observes, “Because I blog I now have contacts, online and offline, with a variety of scholars inside and outside my field. They don’t particularly care that my dissertation is not yet done; the typical hierarchies of the ivory tower break down in the blogosphere so that even graduate students can be public intellectuals of a kind.”

Brad DeLong characterizes scholar-blogging as creating an “invisible college” that includes, “people whose views and opinions I can react to, and who will react to my reasoned and well-thought-out opinions, and to my unreasoned and off-the-cuff ones as well.”   Provided one can write jargon-free prose, a blog can attract readers from all walks of life – including, most importantly, people beyond the ivory tower.  Indeed, citizens will tend to view academic bloggers that they encounter online as more accessible than would be the case in a face-to-face interaction.

Similarly, survey evidence also suggests that academics view blogs as a form of public service and political activism.   This increases the likelihood of fruitful interaction and exchange of views about culture, criticism and politics with individuals that academics might not have otherwise met.

The academics listed in the opening graf exchange ideas freely through blogs and social media platforms, but are we undervaluing the importance of their intellect by culturally offering their male counterparts larger platforms and opportunities?

This piece is a cross-post from Clutch magazine. Read more of cultural critic Evette Dionne’s work from her personal site. 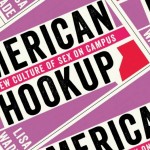 by Ana Valens
What is a hookup, anyway? That’s exactly where Lisa Wade comes in with her new book, American Hookup: The New Culture of Sex on Campus.