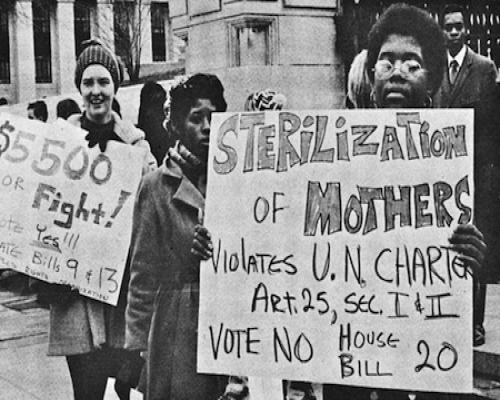 On Tuesday, April 2nd, California’s Sterilization Prohibition bill (SB 1135) goes before the state’s Senate Health Committee. The bill limits sterilization surgeries in all California state prisons, county jails, and other detention centers. It bans sterilizations for birth control purposes—surgeries would be restricted to those with life-threatening medical emergencies and for curing physical ailments.

Is such a bill really necessary? In 2014, aren’t we a long way from state-sponsored eugenics programs, either in or out of prison? But prisons are often sites where attacks on women’s bodies are allowed to continue with little attention or oversight.

As people outside fight for the right to access birth control under the Affordable Care Act, people inside prisons have to fight to keep their ability to have future children. Last summer, the Center for Investigative Reporting released a damning report that revealed how at over 100 people had been given tubal ligations in California women’s prisons from 2006 to 2010 without proper state oversight. The majority of those tubal ligations were ordered by one doctor, Dr. James Heinrich, and his staff. Several people had reported that Dr. Heinrich had pressured them into agreeing to tubal ligations, sometimes when they were actively in labor or on the operating table for a C-section.

The report sparked widespread public outcry. Three days after the report hit the news, California lawmakers called for an investigation. The following month, they held a hearing.

In the meantime, the Center of Investigative Reporting released another report revealing that a few hundred people in California’s women’s prisons were sterilized in other ways. From 2006 to 2012, Dr. Heinrich arranged for 378 additional people to be given hysterectomies, have their ovaries removed, or have endometrial ablation (a procedure which destroys the uterus’s lining). Unlike tubal ligations, these surgeries did not require special approval. 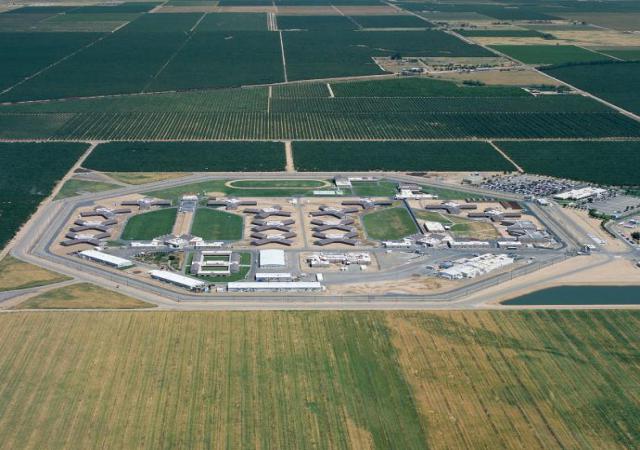 A photo of California’s Valley State Prison for Women, via the California Department of Justice.

That’s right—over 500 people in two California women’s prisons were sterilized within a six-year period. Sterilization should be a safe and effective form of birth control. Many of the 500 people in these prisons may have signed consent forms for the procedure—but there is much debate over whether consent can truly exist in a coercive environment like a prison where staff wield tremendous power over every aspect of a person’s life. Many state prison systems have already acknowledged that sexual consent cannot exist in a prison environment and have criminalized sexual contact between incarcerated people and prison staff. If it’s agreed that a person in prison cannot freely consent to sex, should we then say that that same person, facing the same power imbalance, can freely consent to sterilization?

In addition, in at least one case, prison medical staff clearly attempted to coerce a woman into agreeing to a hysterectomy for a non-existent condition. Kimberly Jeffrey, who was incarcerated in 2007, stated that she saw Dr. Heinrich because of heavy menstrual bleeding. Heinrich told her that fibroids were the cause of her bleeding and recommended an immediate hysterectomy. Jeffrey refused, asking for other options, such as shrinking the fibroids or surgery to remove them. Heinrich told her those were not options. An ultrasound by an out-of-prison specialist found no fibroids, but Heinrich and prison medical staff continued to diagnose Jeffrey as having fibroids. Heinrich continued to press her to agree to a hysterectomy. Jeffrey continued to refuse.  “There were a lot of people (in prison) whispering that Heinrich was taking all the lifers’ uteruses,” Jeffrey told the Center for Investigative Reporting. “So when he tried to take mine, I was, like, ‘Whoa. He’s really spooky.’” 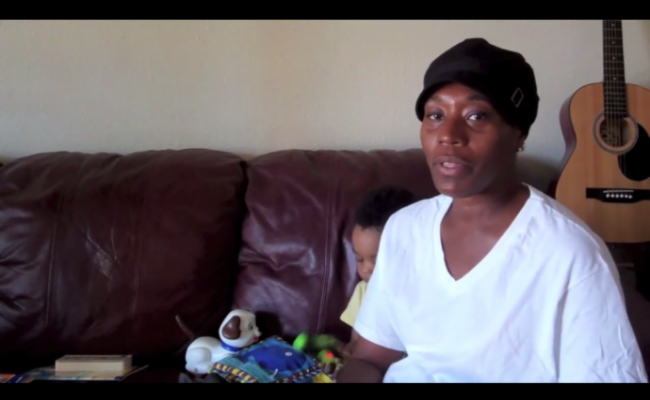 Kimberly Jeffrey at home, in a video interview with Justice Now.

Jeffrey was pregnant when she returned to the prison in 2010 for a parole violation. She gave birth while incarcerated. She recalled that, while sedated and strapped to a surgical table for a C-section, the doctor attempted to verify that he would also be performing a tubal ligation. A shocked Jeffrey refused. The doctor gave her a form stating that she had refused the tubal ligation. “I was very uncomfortable,” she recounted. “I didn’t know if I was signing it right. I don’t think I even had time to read it because it was a long form and the surgery was about to start. All the doctors were around waiting for the surgery.”

It’s important to note that this issue goes further than one bad doctor. While Heinrich may seem extreme, his views (and actions) reflect the viewpoint that, because they are imprisoned, women are unfit mothers and should lose their right to parent. We’ve seen the same attitude held about mothers on welfare–that they are, by virtue of needing welfare, unfit mothers and that they should be sterilized. As late as 2008, politicians have suggested offering financial incentives for poor people to get sterilized.  It’s also important to note that views about unfit parents, reproductive rights, and sterilizations often have a gender bias: people in California’s men’s prisons were not pressured into sterilization surgeries in recent years. 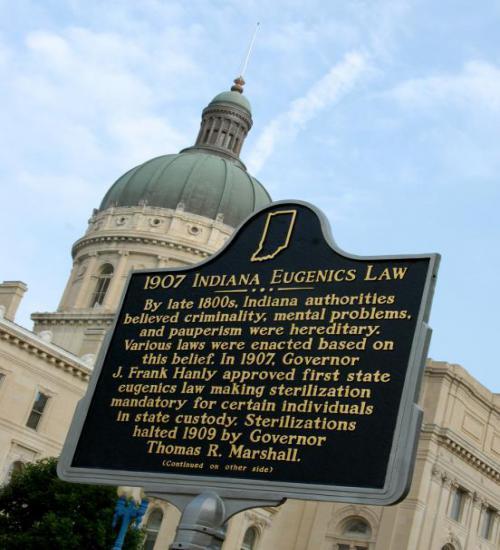 California is not the only state with a history of forcibly sterilizating inmates. Here, a plaque recognizes Indiana’s eugenics law. Photos via Indiana University.

Currently and formerly incarcerated people as well as prison justice advocates have been trying to draw public attention (and outrage) to this issue for years. Courtney Hooks is the campaign and communications director for Justice Now, an organization that works with people in California’s women’s prisons. In a phone interview, she recounted that in 2004, Justice Now began receiving letters from women in prison who had experienced questionable medical care. Justice Now began asking questions and learned that hysterectomies and tubal ligations were happening frequently and under questionable circumstances, including some that had happened without the person’s knowledge or consent. Justice Now also reached out to the office of the federal receiver, which was appointed by the courts to oversee California’s prison health care system in 2006.

“We asked the federal receiver’s office a series of questions about prenatal care. At the end of those questions, we also asked if they perform tubal ligations in prison,” Hooks recalled. It took two years for Justice Now to receive information that more than 100 tubal ligations had occurred in just four years.

Ten years after those first letters reached Justice Now’s office, the Sterilization Prohibition bill is scheduled for a public hearing. “California has an overcrowded prison system where people have been fighting for years for adequate medical care,” notes Hooks. “Many of the concerns around health care have yet to be fully addressed.” For Hooks, this bill is one step towards addressing these concerns. But, she states, “We need to look at how we can reduce the number of people who are vulnerable to these kinds of abuses and that’s by reducing the number of people in prison.”

Conversations around reproductive justice need to extend to people locked behind prison walls. While people demand the right for access to reproductive health services under the Affordable Care Act at the Supreme Court this week, we also need to remember that there are over 100,000 people currently in women’s prisons in the United States. Those people are vulnerable to abuses of power in a system where they lack second opinions and necessary information to make informed decisions. California’s mass sterilizations are a stark example of this. Can we learn from these experiences and move forward to truly include all people in our fight for healthcare for all?

Related Reading: Everyone Should Be Horrified That California Sterilized Dozens of Female Inmates.

Victoria Law is a voracious reader and freelance writer who frequently writes about gender, incarceration and resistance. She is also the author of Resistance Behind Bars: The Struggles of Incarcerated Women. Note: Law uses the term “people in women’s prisons” rather than “women prisoners” to acknowledge that not everyone in a women’s prison identifies as a woman.

Relevant: “Birthright” is the Chilling Documentary All Women Must See In 2017 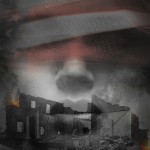 by Evette Dionne
What becomes of women who can’t access the healthcare they need?