Why is Hollywood Scared of Wonder Woman? | Bitch Media

Why is Hollywood Scared of Wonder Woman? 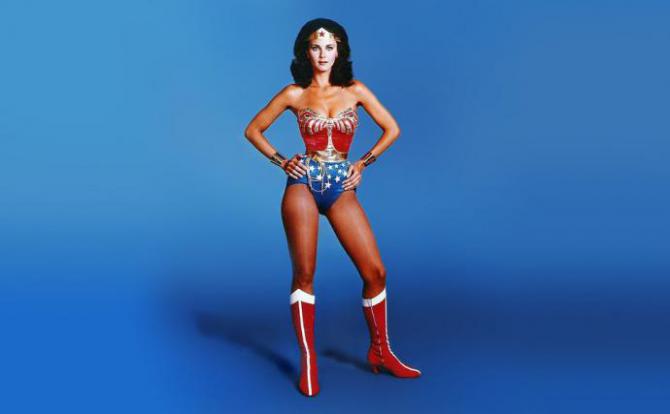 “All the world is waiting for you

And the power you possess.

In your satin tights, fighting for your rights

And the old red, white and blue.”

Wonder Woman and feminism have often had a complicated relationship. The heroine started her life in 1941 as, essentially, a feminist idol. In New Yorker article this fall, Jill Lepore quoted Wonder Woman creator William Moulton Marston saying that “Wonder Woman is psychological propaganda for the new type of woman who should, I believe, rule the world.” Thirty years later, she burst onto the cover of the first-ever issue of Ms. magazine and went on to become a campy TV star.

These days, the clearest sign of Wonder Woman’s uncertain role in pop culture is the beleaguered Wonder Woman movie. While Katniss, Tris, and Gamora kick ass at the box office, it seems like the film industry doesn’t know quite what to do with a female hero whose mission is peace and whose signature weapon is a golden lasso of truth. In November, filmmaker Lexi Alexander discussed how she would refuse to direct the film because any female director on the project would be saddled with extraordinary expectations:

Imagine the weight on my shoulders. How many male superhero movies fail? So now, we finally get Wonder Woman with a female director; imagine if it fails. And you have no control over marketing, over budget. So without any control, you carry the f—ing weight of gender equality for both characters and women directors. No way.

Finally, two weeks ago, Warner Bros announced that Michelle Maclaren (of Breaking Bad, Game of Thrones, and Walking Dead fame) will helm the film. The long-anticipated Wonder Woman movie is now due out in 2017, ten years after Warner Bros turned down director Joss Whedon's attempt to make the film. 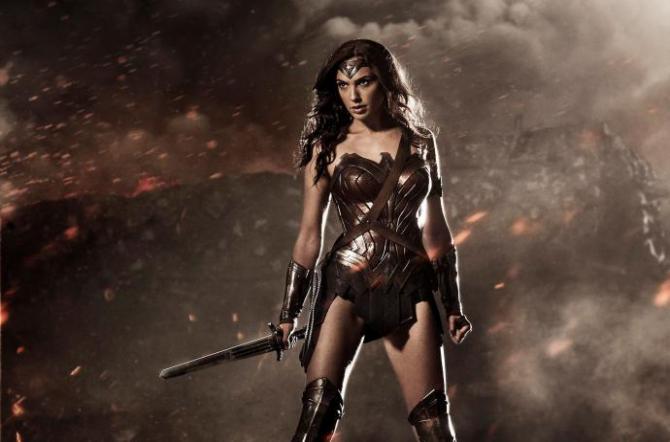 Jill Lepore’s recent book The Secret History of Wonder Woman posits a theory for why pop culture has always been awkward in its embrace of Wonder Woman. Lepore writes that the reason why Hollywood failed for decades to back Wonder Woman as the star of a major is her close connection to the feminist movement. While the industry has churned out superhero movies built around every male comic book figure from Ant-Man to Zod, Wonder Woman continues to make Hollywood a little leery. In the New Yorker article based on her book, Lepore argues that the stumbling block for having today’s society embrace Wonder Woman is that she’s intrinsically linked to the fight for women’s rights:

“She’s the missing link in a chain of events that begins with the woman-suffrage campaigns of the nineteen-tens and ends with the troubled place of feminism a century later. Wonder Woman is so hard to put on film because the fight for women’s rights has gone so badly.”

But where Lepore sees failure, I see progress. Her focus on the failure of the “fight for women’s rights” reminds me of feminists who think all is lost because we have not passed the ERA. We are certainly far from equality in 2014. But today women are the majority of college students, we finally have 100 women in Congress, and a generation of girls is growing up with role models in science, sports, and business. We can both recognize that the world my 11-year-old daughter is experiencing is vastly better than the reality my mom experienced in the 1960s and still be aware of how far we still need to go towards genuine gender equity. For me, Wonder Woman is the promissory note for the feminist movement. This is why feminists love her. She is the embodiment of all we wish to do: fight (with a commitment to nonviolence) for justice, honesty, and equal rights. Since she has an ever-changing backstory, what we see in Wonder Woman is what we put in her. Wonder Woman’s origin story changes depending on the writer, but through all of her many incarnations, we connect her to feminism through the mere fact she is the woman superhero.

Within the hesitancy around Hollywood’s acceptance of Wonder Woman, I see the fear many of us have—what if the film is made and it flops? What if no one comes? Lexi Alexander’s anxiety around directing the film is based not just on audience’s high expectations for the long-awaited film, but also her recognition of how little Hollywood supports women-directed films. If Wonder Woman becomes another Catwoman or Elektra, director Michelle Maclaren will certainly be burdened with accounting for more than she fairly should:  What would a failed Wonder Woman movie say about feminism?

While Wonder Woman owes her existence to the radicalness of feminist science fiction writers like Charlotte Perkins Gilman and the audaciousness of the birth control movement leaders like Margaret Sanger, she is born from the wave of feminism that peaked in the 1930s. In The Way We Never Were, historian Stephanie Coontz explains in the 1930s, a huge wave of women started entering the workforce—despite the gender-segregation and rampant sexism in the workplace, more than a third of married women were working outside the home. Wonder Woman’s character addresses these changing ideas around gender norms. Marston wrote in 1943 that “Not even girls want to be girls so long as our feminine archetype lacks force, strength, and power… The obvious remedy is to create a feminine character with all the strength of Superman plus all the allure of a good and beautiful woman.”

Over time, Wonder Woman evolved as the expectations of women in America did, too. In 1941, Wonder Woman landed her invisible plane and joined the war effort. Her application to the Justice League was enthusiastically approved and she began her duties as the secretary to Batman, Superman and the other man-heroes zipped off to stop the Nazis. 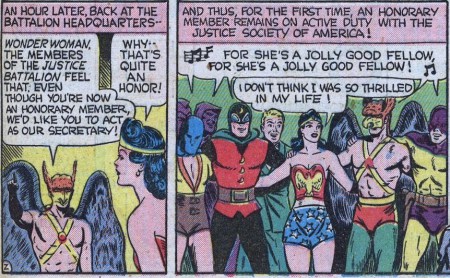 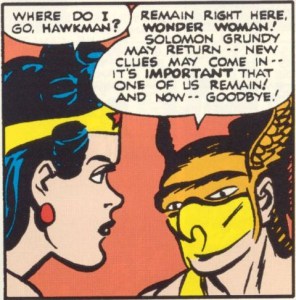 While she eventually saw real action and wasn’t stuck behind a desk taking memos for all the comics published during WWII, Women Woman got a pink slip when her skills were apparently no longer needed. In November 1968, the DC Comics storyline had Diana Prince give up her powers and her costume, fighting crime on the side while running a mod clothing boutique. Kristy Guevara-Flanagan’s documentary on our favorite Amazon, Wonder Women! The Untold Story of American Superheroines, documents Wonder Woman’s descent from World War II patriotic hero to being escorted back to the kitchen. It makes sense that if Wonder Woman could inspire girls to dream big, she could also be used to tell them to forget all that women’s lib crap and work on a Bundt cake instead. Lepore notes that this coincides with Marston’s death and a new writer who “made Wonder Woman a babysitter, a fashion model and movie star.” 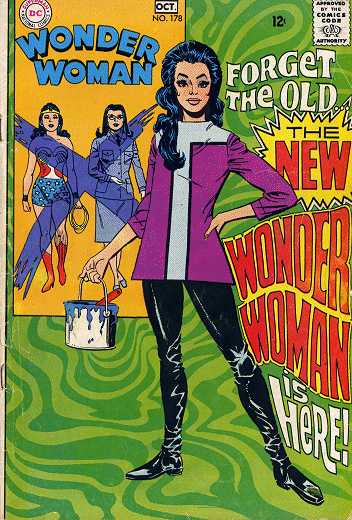 During this era, Diana Prince was quite literally living The Feminine Mystique—she had to choose between keeping her powers and living in the world of men. Eventually, Wonder Woman’s powers were reinstated and she gained a whole new audience in the 1970s TV show. It’s worth noting that there is one episode of the TV series that is called “The Feminum Mystique,” where “feminum” is a rare ore found only on Paradise Island and evil men try to take control of this precious metal. Despite Wonder Woman’s unrealistic and sexy outfit, she oozed feminism whenever the writers could sneak it in. 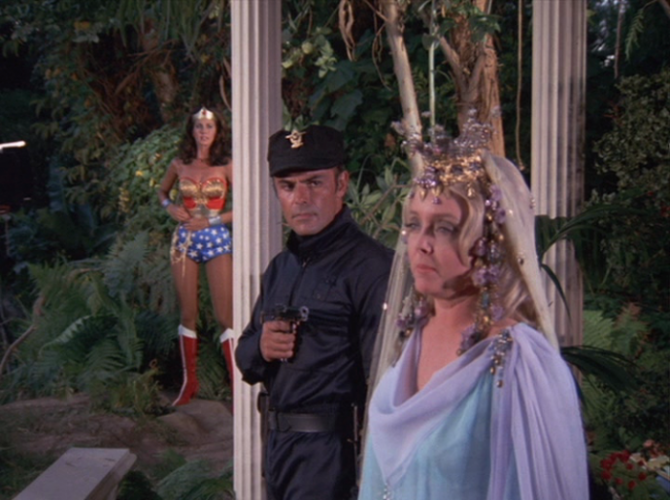 A still from the 1976 Wonder Woman two-part episode “The Feminum Mystique.” Image via This Was TV.

In her work, Lepore argues that a Wonder Woman movie would be fundamentally flawed because the feminist movement these days is not something 1940’s Wonder Woman would be proud of. But I think Wonder Woman has always been aspirational. At a moment when we continue to ask, “How are we still fighting for paid maternity leave and equal pay in 2014?” I argue we need Wonder Woman now for the fight, not when abortions are free and obtained without shame.

On The Mary Sue, writer Susana Polo notes that without scores of movies about her, we frame Wonder Woman in our own imaginations. This makes her easy to idolize and mythical. We know Batman and Superman’s flaws all too well, but Wonder Woman’s character and origin story shifts with each new era.  “Wonder Woman is tricky because our culture has made it tricky,” writes Polo.

I recently talked to Polo about Wonder Woman's role in pop culture—she believes that's it's Wonder Woman’s status as a woman, not necessarily her ties to the feminist movement, that makes Hollywood hesitant to embrace her.

Blockbuster film studios rely heavily on merchandizing: the superhero action figures, backpacks, and lunchboxes. Polo notes that once a female character makes it onto an item—backpack, lunchbox—it becomes a “girl” item. Few parents of boys will overlook this and buy it for little Timmy and they’re not marketed in a gender-neutral way. She could appeal to the full spectrum of girls and boys, but film industry marketers would have to rethink their approach to her.

This issue is actually addressed in the first issue of the new DC series Sensation Comics Featuring Wonder Woman. This series has no continuity, rather is a collection of Wonder Woman stories by different artists and writers. In one she comes to the rescue of a fanboy who is being teased for liking “girl things.” Can you imagine the playground bully coming face to face with Wonder Woman? It’s like the episode of Diff’rent Strokes when The Gooch gets a call from Muhammad Ali. Classic.

When I asked my friends why they love Wonder Woman, many of them cited her being the first woman superhero they knew, but a good number cited both her strength or her dedication to peace and justice. In a world where dystopian movies bring in money hand-over-fist, perhaps the Wonder Woman movie should have her as a President who overcomes a do-nothing Congress to bring about peace in the Middle East, enacts both a living wage and equal pay while handing out birth control at rallies. Because we all know that even if the feminist movement gets everything it wants, there will always be those whose mission it will be to drag us back to the imagined “good old days.” That is the enemy we need Wonder Woman to fight.

Related Listening: Our podcast episode “The Evolution of Wonder Woman” explores the history and power of the hero.

Veronica I. Arreola is a professional feminist, writer and a mom and can be found at VivalaFeminista.com.

This is a fantastic exploration. I always did wonder why they hadn't touched Wonder Woman yet...I assumed it was because she was a woman. Perhaps the ties to feminism haven't helped, but I still think I agree that it's mainly because studios don't want to put out a superhero movie that centers around a woman. They think people won't relate or at least, that they won't admit they do.