Why We Need More Geek Girls Like Willow | Bitch Media On TV and in real life, there’s a dearth of young women in the fields of science, technology, engineering, and mathematics. While a few bygone shows exposed the barriers against geeks in general (think My So-Called Life’s Brian Krakow, Buffy the Vampire Slayer’s Willow, and Freaks and Geeks’s Lindsay Weir), contemporary television shows fail to portray the bumpy path that exist specfically for young women male-dominated science and math career tracks. I say we need more characters like Willow.

On Buffy the Vampire Slayer, high schooler Willow Rosenberg (Alyson Hannigan) is the gang’s resident smarty pants. While she receives validation for her intellect from her school’s computer instructor, Ms. Calendar, and the magical cadre’s mentor Giles, Willow also faces rejection from Sunnydale High’s in-group, headed by Cordelia Chase (Charisma Carpenter). Here, we see the mixed messages that real-life young female tech talents hear early on: You can either be teacher’s pet or one of the popular kids. Willow battles (literally and figuratively) for acceptance, and ultimately she grows comfortable with her mathematical—and later, Wiccan—powers. However, not all girls in real life fare so well.

Offscreen, peers and authorities often enforce restrictive gender roles that make young women feel discouraged from pursuing math and science career paths. This is well-documented, it’s even something the military has recently taken on. The study Explaining the Gender Gap in Math Test Scores explains:

A report entitled “Women’s Experiences in College Engineering,” funded by the National Science Foundation and the Sloan Foundation, writes that the exit of many young women is not driven by ability, but rather that this decision is influenced by…negative aspects of their schools’ climate, such as competition, lack of support, and discouraging faculty and peers. “If you’re in an environment when you’re an extreme minority, you feel the burden of representing a really large group,” adds Vanessa Hurst, co-founder of Girl Develop It, which provides affordable and accessible hands-on instruction to women who want to learn software development. “If you’re the only woman in the room, everything you say might be ‘what women are like.’ It just makes you less comfortable asking questions, [though] men and women both do it.”

On top of that, even when women they manage to stick with math and science long enough to get a diploma, academic institutions have a lousy record of hiring women, in part because of an institutional bias against people who are care-givers.

While shows like Buffy the Vampire Slayer and Freaks and Geeks accurately depict barriers against young women in these careers, series including 24 and Dollhouse barely gesture toward the prevalence of these sexist cultural messages. On Dollhouse, we meet Bennett Halverson (Summer Glau), a brilliant neuroscientist who brainwashes—er, programs—human subjects to carry out often illicit actions for the Dollhouse’s clients. When Topher, a male programmer from another Dollhouse branch, first meets Bennett, he’s taken by surprise. He’d heard her name before but assumed that she was a man. But because she’s a woman, and a beautiful one at that, he posits that she’s just a doll programmed to work as a scientist. He even tries his disruptor device on her, which would have wiped a doll’s memory like a magnet would a floppy disc’s. When she’s unaffected by the disruptor, only then does he accept that this woman can possibly be a genius scientist.

Sure, it’s great to see skilled science chicks on Dollhouse, 24, and The Big Bang Theory, but it’s shortsighted not to acknowledge how much these women are outliers—not due to paucity of female talent in their fields but because dudes like Dollhouse’s Topher often marginalize women in their profession.

Why should we worry about getting more women in the math and science fields? Because this growing high-paying sector not only allows women to rely on our intelligence rather than our sexuality, but also to earn salaries with less of a gender pay gap and to build the applications that we rely on every day. Not empowering women to succeed in this line of work does ourselves a disservice. It means perpetuating the status quo of overwhelmingly male-dominated tech culture and therefore prevents a diverse innovations that can only be borne from a diverse workforce.

I don’t anticipate that fictional TV narratives will yield a solution, but perhaps real-life women-in-science programs like Girl Develop It, Girls Who Code, Ladies Who Code, PyLadies, Black Women in Computing, and Latinas in Computing can lead the way.

our goal shouldn't be to make woman proportionally poor or rich, it should be to eliminate poverty. thinking that there should be fewer men in creative subjects like math, science, and computer science and more woman is neoliberalism at it's finest. our goal should be to give everyone access to these subjects, not make each category a representative sample of the population.

You might note that nowhere in this article did it state that anyone's goal is force the number of women in STEM fields to be perfectly representative of the population's gender distribution, so I can only assume that your reading of it says more about your own perspective than the problem at hand.

The fact is that the percentage of women in STEM fields much greater in other cultures (notably outside North America and especially the US), giving us good reason to believe that there's a negative cultural influence at work here. And this article (as well as many others of late) posit several likely mechanisms that might be at work.

Those who decry any attempt to address this problem as "neoliberalism" (among other things) are only exacerbating it.

It's true we should be thinking about eliminating poverty itself, and the systems that create it, not just creating "proportionate" poverty for each social location... Neoliberal capitalism IS a significant enemy, and this article entirely failed to analyze or critique it.

Despite this oversight, I appreciate many of the points the author raised.

Alleging that our goal is "fewer men in creative subjects"... Well, what an interesting turn of phrase for your concerns, Nathan, especially considering the percentage of men in computer science and "hard" sciences is at its highest since the 1980s!

Having some space to discuss this massive and persistent lack of women is important. Let's have more articles about this, Bitch Media, and let's have more intersectional analysis of the issues!

I think you missed the point. More women does not mean less men. Encouraging women to participate in the fields of math and science is not the same thing as discouraging men from doing the same. The problem is that women do not have equal access to these fields on a social level. I'm a digital media/computer science girl. The article is spot-on when it comes to the flack women take for being ambitious, intelligent, and geeky. There are tons of media depictions that portray a geeky, smart man winning a hot, beautiful woman as if she is a prize. Geeky women, however, are labeled as unattractive, asexual, and undesirable.

I would contend that the female characters of some medical dramas, while not necessarily geeks, are all representations of women interested in science/technology dealing with the difficulties inherent to a male dominated field.

Of course, that particular issue and its ramifications are almost never the focus in order to privilege a more normative view of women. So the struggles of these characters are erased in favor of romantic entanglements and other problems that supposedly make better TV/drama.

It's sad because there's so much potential in these shows, but the creators/writers choose to appeal to the public's commonly received notions about women's behavior rather than to challenge them.

By female issues, I mean everyday struggles and questions. Those are glossed over everywhere from minimum wage employees to women at the top of corporations. Everyone's fighting to make it seem easy to work a 60 hour week while keeping a clean house and raising their kids. Why? It's not easy, it's a battle; and sometimes it sucks.

We can't learn from each other if we try to gloss everything over to make it all seem perfect on the outside.

I immediately thought of Penelope Garcia of Criminal Minds and Abby in NCIS even though their depiction seems to me rather stereotypical: they're both oddballs..

As a woman and a scientist, not only am I disappointed by the lack of smart female characters on TV, but also the stereotyping that goes on when such a character is included. On The Big Bang Theory, Amy Farrah Fowler is shown working in the lab, having intelligent discussions, etc. but is literally the female equivalent of (also unrealistically stereotyped) super-nerd Sheldon. On the other hand, we know that Bernadette also has her Ph.D. and also does lab work, but she rarely talks about her work (other than to make fun of Howard's less prestigious degree). Bernadette is well-dressed and stereotypically feminine while Amy supposedly didn't shave her legs until her late 20s.

Most of my female friends are also in science, and just like all women, their chosen style and gender expression is quite varied! Of all the female scientists I've met, very few have been as awkward and unkempt as Amy, but most of them will happily discuss their respective fields of research as she does.

I think part of the reason that young girls aren't as attracted to STEM (science, technology, engineering, math) fields is that it is presented to them by the media as a choice between being smart and being "normal", ie: someone with a social life, a boy/girl friend, and a sense of style. It's a shame, because from my experience doing science outreach work, I know that girls are just as smart and just as capable as boys - they just aren't always getting that message.

I will certainly share this essay (and ensuing comments) with my undergrad women's studies students as a current, real-life example of a feminist critique of pop culture. (The *Buffy* piece is a bonus.) What really strikes me--as a boy-mom and as a women's studies professor--is how early these representations of gender roles/women's work begin. Two of my elementary-school-aged sons' favorite cartoon series feature science geek characters and, no matter what, the smart girls' hearts always trump their brains. Thanks for the essay!

Relevant: Raising the Minimum Wage Would Be the Best Black Friday Deal 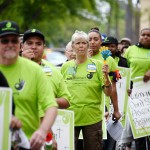 by Hannah Strom
Black Friday is a good time to reflect on the need for a bigger minimum wage.