Why Do People in Prison Go on Hunger Strike? | Bitch Media

Why Do People in Prison Go on Hunger Strike? Two weeks ago, women incarcerated at Estrella Jail in Phoenix, Arizona staged a hunger strike. Sheriff Joe Arpaio, who runs the jail, told media that the women were striking over the all-vegetarian meals being served. His direct quote was actually: “They ought to shut up and eat what they have, they happen to be in jail and I’m the sheriff and I’m the chief chef I decide what they eat.” Spinning the women’s protest as just a knee-jerk response to having to eat vegetarian food helps turn a serious hunger strike into a punchline.

But the women’s issue is more than the lack of meat—they charge that the food served is spoiled and moldy and that the people in charge of their care (like the charming Sheriff Arpaio) don’t seem to care about their valid concerns.

On Thursday February 13th, the hunger striking women were joined by 90 people in the jail’s male unit who refused dinner. That action drew media attention—the Arizona Republic published a short piece on the hunger strike, interviewing two of the men (but none of the women) involved. One man told the Republic that he had been motivated to participate in the hunger strike as an act of solidarity with the women: “If a woman does it, I’m gonna do it. That’s what men are supposed to do.”

People who want to change unjust policies have some effective tools at their disposal: social media, public meetings, the ability to take to the streets. But in jails and prisons, the tools of protest are severely limited. In an environment where the ability to organize and speak to both family and media is greatly limited, refusing to eat is one of the few things people can do to draw media attention to prison conditions and speak up for themselves in mainstream media. Prisoners have staged numerous hunger strikes in recent memory. Last year, hunger strikes in Guantanamo Bay and California’s Pelican Bay Supermax made repeated headlines across the nation. This past January, people at Illinois’s Menard State Prison launched a hunger strike to protest their open-ended placement in solitary confinement. Now four weeks into the strike, they have also declared a liquids strike.

When powerful people like Sheriff Arpaio do all they can to paint prisoners as complainers, what they’re really trying to do is control the media narrative around prison issues. While over 100 men who have been held without charges or trials for over a decade in Guantanamo went on hunger strike last year, for example, prison officials continued to describe the desperate detainees as “some of the most pampered prisoners on the planet.” After major international attention focused on Guantanamo’s hunger strike throughout 2013, military officials declared a media blackout. Reporters couldn’t help but point out that refusing to release the number of people on strike in Guantanamo runs contrary to the prison’s official motto: “Safe, humane, legal, transparent detention.”

“In that [prison] situation there aren’t many ways you can speak out against injustices. They have to go to the extreme and do a hunger strike,” Uptown Law Center prisoner rights coordinator Brian Nelson told Common Dreams. Nelson should know—when he was incarcerated at the now-closed Tamms Supermax Prison, he took part in a hunger strike that lasted 30 days.

Although officials try to spin strikes as being motivated by one minor issue or another, people behind bars frequently utilize hunger strikes to challenge (and sometimes successfully change) inhumane prison practices. Hunger strikes have the ability to attract outside attention in ways that following prison protocol—such as filing grievances and working through the paperwork—do not. For the women in Phoenix’s Estrella jail, however, filing grievances against the moldy food was not even an option. They reported that jail staff told them that they were not allowed to file grievances even though they had done so about other conditions in the past. The fact that hunger strikes often lead to brutal retaliation (including force feeding) shows how strongly people need outside attention and media coverage of their conditions. For instance, California’s recent 60-day prison hunger strike pulled national attention to the issue of indefinite solitary confinement. In a joint statement of support, California legislators Loni Hancock and Tom Ammiano credited the hunger strikers for forcing the issue into the spotlight: “The issues raised by the hunger strike are real—concerns about the use and conditions of solitary confinement in California’s prisons—are real and can no longer be ignored.” Lesiglators Ammiano and Hancock convened several hearings on the issue and Ammiano also recently proposed a bill that would place a 36-month cap on how long someone labeled as part of a “security threat group” can be kept in solitary confinement. Thirty-six months is extremely long time to be held in solitary, but current practice in California prisons allows for indefinite solitary confinement. Would these hearings—and the proposed bill—be happening had thousands of people not put their bodies on the line to draw attention to these issues?

Even when they don’t garner the extensive media attention that the California strikes did, some hunger strikes have forced jail and prison administrations to change conditions. For instance, in 1988, 28 women at Oregon Women’s Correctional Center organized a hunger strike and sit-down protest against the absence of available educational programming for women. The result? Women were allowed to participate in college programs that had previously only been offered at the men’s prison. In 1992, nearly every Haitian immigrant locked away at the Krome Detention Center in Florida went on hunger strike to protest the immigration policy that said Haitian refugees must be detained while Cuban asylum seekers could go free. The strike had some effect: in the six months that followed, 88 of the 159 Haitain asylum seekers were released from the detention center.

Right now, no one is sure if women are still on strike in Phoenix’s Estrella Jail. In an email, one concerned friend stated that she hadn’t heard from her loved one in a few days and was growing worried. She disputed Sheriff Arpaio’s claim that the women were simply unhappy with the jail’s meatless meals: “They just wanted safe food to eat and someone to listen about the deplorable conditions.” 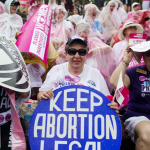