Without Media Focus, Would Steubenville's Rapists Have Been Found Guilty? | Bitch Media

Without Media Focus, Would Steubenville's Rapists Have Been Found Guilty? Today we finally have something to applaud in Steubenville: A guilty verdict. Many people were holding their breath in the high-profile rape case, expecting that despite clear evidence of the two defendants’ guilt, our legal system would fail the victim. We thought we’d once again be talking about how a star athlete escaped prosecution.

It’s sad, but finding these rapists guilty is exceptional. According to depressing statistics, only nine percent of rapes in America result in prosecution. Though incarceration is clearly not the sole solution to rape, the fact that these two small-town stars will spend at least a year in a juvenile detention facility sends an important message that people regardless of social status can be held accountable for committing sexual violence. This satirical Onion video is scarily too spot-on:

Why did the perpetrators in Steubenville get punished while 81 percent of other stories like this wind up with a different result? One of the big factors was that the victim had the support and strength to bring her case to court.  But what’s also undeniable here is the power of media to build attention and keep the case from falling through the legal system’s many cracks.

First off, social media preserved the evidence of the crime in a digital trail that was impossible to ignore. The texts don’t lie. While the defense team built their strategy on calling the accuser a liar—putting former friends on the stand to say she’s unreliable—a string of text messages from the girl and the rapists supported the horrible truth.  The judge knew that the guy who appeared in court all clean-cut and respectable was the same guy who’d texted friends an explicit photo of the victim and said, “We’re hitting it for real. Where you at?”

In his reading of the guilty verdict, Judge Thomas Lipps pointed to the power of the texts to destroy the rapists’ attempted about-face, saying, “I closely examined all the evidence and reread all the text messages in this case.  Many of the things that we learned during this trial that our children were saying and doing were profane, were ugly.”

Then there’s the video. Momentum behind the case might have petered out this winter, as the defendants’ legal team pushed to postpone the trial and move it out of Steubenville. But when Anonymous posted online a now-infamous video of one of the rapists’ friends bragging about their exploits, suddenly the whole country seemed to care about the case. Like with the text messages, it’s extremely rare to see the real, ugly face of rape so clearly. Now, over one million people have seen that the all-American culture of the football team was one where it was okay to describe an unconscious girl as “deader than Trayvon Martin.”

Residents of Steubenville have lamented that their town has become a flagrant example of rape culture. But without the national attention, Steubenville would likely not have taken the rape so seriously. Up to the end, the boys claimed innocence and had strong supporters among coaches and friends. Rapist Trent May’s apology yesterday in court was hardly a recognition of the impact of his crime—he instead apologized for taking pictures of the rape, saying “No pictures should have been sent out, let alone been taken.”

Meanwhile, Ma’lik Richmond apologized in court yesterday for the pain he had caused “you guys.” While he and Trent Mays sit in juvenile detention for the next year or more, let’s hope they come to recognize how many people “you guys” actually are, to understand how their act of violence will reverberate for generations. The trial ended yesterday, but the assault and fallout will have long-term effects that the girl and the wider community will deal with for decades.

Sexual assault always sends shockwaves radiating out into the community—they’re usually just not as visible as in Steubenville. The whole country is coming to an understanding that the football players’ terrible choices have a created a wide circle of destruction that encompasses their immediate victim, their friends, their families, their team, and their town. Without media focusing on all these impacts, the girl and her family may have been left the way many survivors of sexual assault are: to deal with the violence on their own. 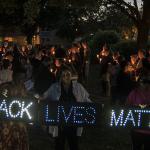