Sexism and the City | Bitch Media

Sexism and the City

It’s rare to see TV show characters who actually have a job. A recent study showed that only half of prime-time speaking characters possess an “identifiable job.” When shows do depict women working, we’re rarely portrayed in nontraditional occupations. Television would have us believe that when women do have careers, we’re in stereotypical “women’s work” like being administrative assistants or glamorous fashion designers. In TV careers, men do the heavy lifting.

Last week’s episode of Parks and Recreation, “Women in Garbage”, is fairly unique then, in showing women at work in a male-dominated career: takin’ out the city’s trash. In their own hilarious way, Parks and Rec focused on the fraught fight that needs to happen in order to undo a city’s institutional sexism. In the episode, City Commissioner Leslie (Amy Poehler) discovers that very few women occupy jobs in Pawnee’s public sector. She attempts to create a gender equality commission, but finds she’s presiding over an all-male group—in April’s (Aubrey Plaza) words, a “sausagefest.” Leslie points out that the sanitation department is the worst offender of gender inequity—and one of the city’s highest paying departments. When one man says, “It’s a very physically demanding job. Your average woman can’t handle it”, Leslie and April take it upon themselves to work for a day as garbage collectors to show the dudes that women are capable of doing the job.

In real life, it’s true that women are underrepresented in the particular job shown on Parks and Recreation; among refuse and recyclable material collectors, only about 8% are women. However, the show points out that we can correct the gender imbalance. After Leslie and April’s experimental day as sanitation workers, the sanitation department later hires three new female employees. While it’s not television’s mission per se to advocate for gender equality, this episode manages to do so while still fulfilling TV’s main goal of providing entertainment. (And on that note, mad props to April for this delightfully sarcastic line: “Leslie, you’ll never land a beau with that domineering tone.”) In contrast to “Women in Garbage”, several TV shows depict men and women in stereotypical jobs without illustrating the possibility of a better gender balance. Take, for example, the series that inspired Parks, The Office. In the first seven seasons of the American version of the show, the head boss is an inept Michael Scott (Steve Carell). The top salespeople are Dwight and Jim. However, the main female characters are relegated to the reception desk. First it’s Pam (Jenna Fischer), Jim’s crush and eventually his wife; later it’s Erin (Ellie Kemper), who becomes Andy’s girlfriend and Pete’s crush. In this office as well as its accompanying warehouse, men do the bulk of the work while the women assist and ultimately partner with them romantically. And while the show illustrates this stereotypical gender imbalance satirically by portraying Michael as a dolt undeserving of responsibility and Pam as talented and underappreciated, the show never gestures toward the possibility of change and therefore serves to maintain the status quo. (Remember when Jan [Melora Hardin] ran the office? Let’s never let that happen again, you guys!)

While I would like to see more progressive and, quite frankly, surprising portrayals of women in the workforce, I do think it’s worth noting that women on TV have made strides. Think back to I Love Lucy’s episode “Job Switching” from 1952, which not only features the famous scene at the chocolate factory but also explored the then-ridiculous question: What if women worked and men ran the household? Chaos!

However, in our current post-recession era with a still-contracted job market, it’s essential that young women remain critical of the cultural messages that TV broadcasts. Sure, The Office satirizes a workplace in which a childish man is the boss and capable women go unnoticed except as potential girlfriends. But by not offering an alternative schema, this narrative seems complicit in reinforcing the stereotype of women as aides to privileged men. I think the next step in TV storytelling is not just to ridicule this premise but to turn it on its head. Shows like Homeland, Deception, and Veep—all woman-centric and featuring young women in nontraditional occupations—do this already. So instead of asking whether women can handle traditionally male jobs, TV series will more often begin to ask what the impact is for everyone when women are in positions of leadership.

As Leslie says on “Women in Garbage”: “We can’t be just as good as the men. We have to be better.” I’d like to see a TV narrative where that’s no longer the case.

Did you actually keep watching the office? Because they also get a WoC on the warehouse and Catherine Tate's character later takes over the office. Not to mention the other female characters in the show who are also sales. This article has to be a reprint or drudged up from a drafts file from somewhere.

Yes, not to mention that Phyllis has always been in sales, Angela in accounting, Meredith in supplier relations. And yes, Val, a black woman is now head of the warehouse and appears to be well-respected by her all male staff. Then there was Kathy Bates as the tycoon who bought Dunder Mifflin, Rashida Jones as another sales rep, "Jan" the former VP of DM...

I must be watching the wrong shows. :-) Female characters I enjoy include Gina Torres on "Suits", Kyra Sedgewick in The Closer (show ended last year), Sasha Alexander & Angie Harmon in Rizzoli & Isles, the ladies of the CSI franchises, and of course kick-ass Pauley Perrette on NCIS. Which is not to disagree with your thesis of "most women's work portrayed on TV" but there are interesting female characters out there. Unfortunately, after considering my list, many of them are on cable and that's an access/financial barrier for some folks.

Excellent point about the numerous other women on television who desensitize the public to the fact that women and men have acceptable roles in the work world according to gender. I haven't seen the show mentioned, and while I'm all for equality in the workplace, and its value for engaging social commentary, I can't say I want my children (male or female) to aspire to a career in sanitation. I remember Gina Davis in "Commander and Chief" a number of years ago in the role of U.S President. Unfortunately, I don't think it made it past its first season. I, too, used to watch "The Closer" and loved the no-B.S. attitude of Kyra Sedgewick's character; though, in the last 2 seasons I became increasingly dismayed with the blatant sexism that began to manifest in the story lines and writing. It almost seemed to be communicating that yes, women can succeed in professional positions of authority, BUT, they will still have to deal with misogyny cause that's just the way it is. Disgusting. I enjoy watching "The Big Bang Theory" for its witty banter, but I've started noticing the same degrading undercurrent as well. For example, one male character describes his wife as having money bags as well as fun bags! I'm horrified!

I have always thoroughly enjoyed BBT as well, but it's funny you mentioned that line when Howard was describing his wife because I was a little annoyed by the same comment lol. Over the seasons, Ive definitely been noticing more of the sexism in the show, but I try to look past it because the show is overall very smart. I also wanted to throw a response out there to your noticing the sexism in The Closer and how they began to make it seem as though regardless of the fact that a woman can succeed in a position of authority, she will probably experience misogyny bc that's how it is. My reply is this- I myself experienced this firsthand and it will always continue to infuriate me and make me sad.. Seven years ago, I finally became a police officer, which was the job that would have been just perfect for me. I experienced more sexism and misogyny than I could've ever expected to. Now, I'm not saying there were not a few men I worked with who treated me respectfully and as though I could do just as good a job as they could. But the majority of officers I worked with (who were supposed to have my back and respect me), including my own supervisor, threw me under the bus, talked down to me, yelled at me and sexually harassed me. In a position like that, if you want to be accepted, you're expected to accept such behavior and DEAL. When I DID stand up for myself, I would get in trouble for opening my mouth. Obviously that is no longer my job, but I think the treatment I received was complete bullshit. And though I do not find it acceptable to treat colleagues with any less respect than they deserve based on their sex, it seems it will never end. It continues in my current job and makes me furious. It's easier for me to put people in their place where I work now however. And on the tv note, there are many shows I will not watch simply due to the fact that women are treated in an unsavory manner and it's looked upon as just normal, acceptable behavior.

I just finished the first season of Grimm, and the work issue really stuck out to me. Juliette, girlfriend of the main character is a veterinarian, although I don't think we're told what she does until more than halfway through the season. Which I wouldn't have an issue with necessarily if there were at some point even just a hint that she worked, or if we were told she was temporarily unemployed; but up until we find out what she does, every time her boyfriend talks to her during the day, she is at home. Doing laundry, doing research for him, getting ready to go shopping with friends, and so on. There's never any mention in these calls of her going to work late or being on a lunch break to explain why she's at home no matter what time of day they talk; so it's this weird dynamic where the show treats her as this stay at home girlfriend who hangs around at home so as to be at Nick's beck and call. It's not until the next to last episode of the season that we actually ever see her doing anything work related.

Fascinating! I'll have to check out this show now. Thanks for the tip.

Um but the reality of the workplace is women are still treated often as inferior to men. And this show is satirizing…the workplace. Of America.

On top of that this article blatantly ignores female characters in positions above men or the women who are vastly smarter than the male characters. Not to mention the HBICs.

And “privileged” men? Really? Like, did you ignore the point of a major aspect of Michael’s character; that he says things that are horrendously ableist/racist/sexist/homophobic and it is addressed by characters of those labels/identities?

Also there are NAMED FEMALE RECURRING CHARACTERS who work in the Warehouse. A “male dominated job”. One of them is in charge of them.

I can’t believe I’m arguing this.

Relevant: The Cost of Winning 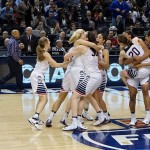 by Britni de la Cretaz
How should people who care about social justice feel about a nonprofit association that exploits athletes?