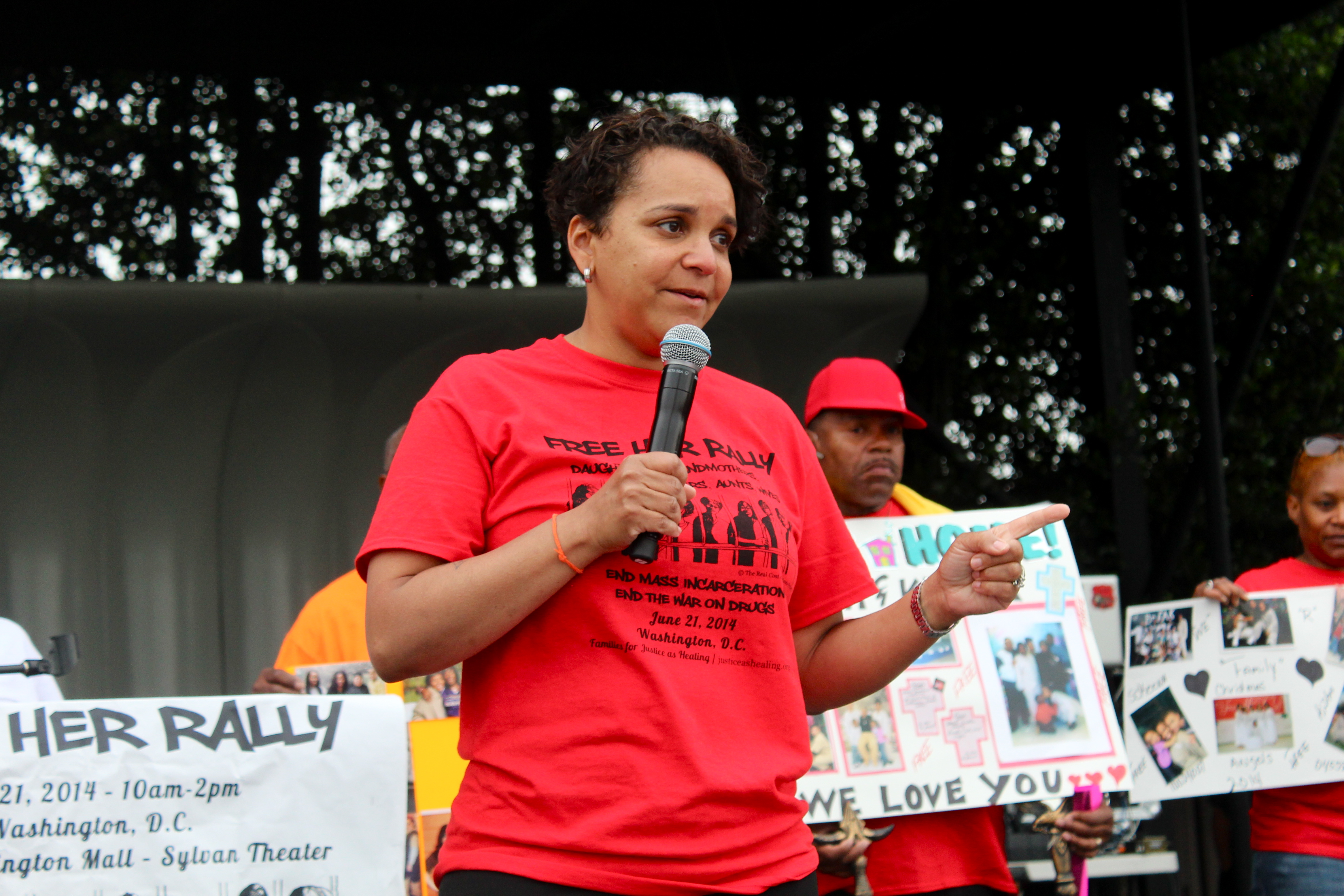 The women of Orange is the New Black are, for the most part, fiction. But this summer, actual women who were incarcerated at the prison where the hit Netflix show takes place are organizing in for prison reform. On June 21, women who had been imprisoned at FCI Danbury, where Orange is the New Black author Piper Kerman served most of her sentence, convened on the National Mall in Washington, D.C. for a rally called Free Her. Over 300 women, family members, and advocates called for an end to mass incarceration and drew attention to the ways the War on Drugs devastates the lives of women, their families, and their communities.

“I sometimes spend my quiet time thinking about the women inside,” said Beatrice Codianni, who spent 15 years in Danbury. “I think about the friendships forged in prison.” She recalled sitting in the prison’s packed TV room the night Obama was elected president. “We were so excited and we had such high hopes. We gathered around the TV and when the results were announced, the women just roared. They, me, everyone was so excited. We said, ‘Now we will have a president who will change these draconian mandatory sentences.’ We had so much hope.” Nearly eight years after that hope-filled night in Danbury’s TV room, Codianni asked the crowd at the Free Her rally, “How many more elderly people will die in prison? How many more women will die from substandard medical care? How many more kids will be sent to foster care because their moms are locked up? I want Obama to release all prisoners who are locked up under the drug laws.”

Here are the facts: Since 1980, the rate of women’s incarceration has increased 518 percent. In 1980, less than 13,000 women were in prison in the United States. By the end of 2012, that number had risen to over 108,000 (not including the 102,000 women in local jails). Women of color are disproportionately likely to be in prison: The Bureau of Justice Statistics found that Black women had an imprisonment rate of nearly three times that of white women. The incarceration rate for Latinas is nearly twice that of white women.

The idea for the Free Her campaign began at a table in the prison yard at Danbury. There, five women realized that they needed to advocate for themselves and for other women behind bars. “I was surrounded by women serving long sentences,” recalls Andrea James, who spent a year-and-a-half in prison. “They were separated from their children, their families and their communities.” After reading about the American Legislative Exchange Council (ALEC), which brings together state legislators and corporations to draft model legislation such as mandatory minimum sentencing laws and Florida’s controversial Stand Your Ground statute, the women realized they needed a similar organization. “I couldn’t think of an existing organization like this that mass-produced legislation working on the side of the people,” says James.

During their in-prison meetings, the women realized the need to draw public attention to the mass incarceration of women. Women, they realized, were ignored in many of the discussions around mass incarceration. Here’s how James describes their conversations:

That need grew into the Free Her rally and the nonprofit Families for Justice as Healing.

“This is the first rally (that I know of) organized by formerly incarcerated women to demand freedom for other women in prison,” says former political prisoner Susan Rosenberg, who spent 16 years in the federal system before being granted a pardon on President Clinton’s last day in office. “This is about building a movement to end the mass incarceration of women.”  Rosenberg spent the last years of her sentence at Danbury. “Seeing the same people that I was in prison with [outside and here] now, seeing the success people have had despite everything has been astonishing.” At the rally, Rosenberg pointed to what Obama could do to reform the prison system. “What would happen if Obama released 3000 women incarcerated for the war on drugs?” she asked the crowd. “They would come home. They would rebuild their lives and grow their communities.” She reminded the audience that executive clemency, sentence commutations and sentence reductions are all within Obama’s power and do not need new legislation. But, she added, “We have to remember the quote from Frederick Douglass: ‘Power concedes nothing without a demand.’”

Rosenberg is not the only alumna of Danbury to attend—and speak at—the Free Her rally. Although she had never used or dealt drugs, Dorothy Gaines was sentenced to 20 years in prison on conspiracy charges after her boyfriend, a low-level drug dealer, was arrested. She fought for her freedom and, in 2000, received executive clemency from President Clinton. She traveled from Alabama to Washington, D.C., to speak at the Free Her rally. She and Rosenberg are also real-life examples of the demand that the president release those imprisoned under the War on Drugs. Lashonia Etheridge spent 19 years in prison, mostly at Danbury. “I see a lot of women that I served a lot of time with. We were like family,” she said. But seeing the women that she called family also reminds her of the women who remain behind bars. “It’s not okay to incarcerate women for nonviolent drug offenses for lengthy times.”

In April, the Obama administration announced it would review the sentences of federal drug war prisoners for possible commutation, raising the hopes of many that the women they’d left behind would see life outside the bars soon. But, as Susan Rosenberg noted and Andrea James reiterated, change will not come without a fight. “I don’t want people to leave here thinking that what’s being said in the White House is making a difference,” says Andrea James. “We are in the thick of a fight.”

Just to point out, the organization is actually called Families for Justice as Healing (not Healing as Justice). Great piece, thanks for covering the rally!