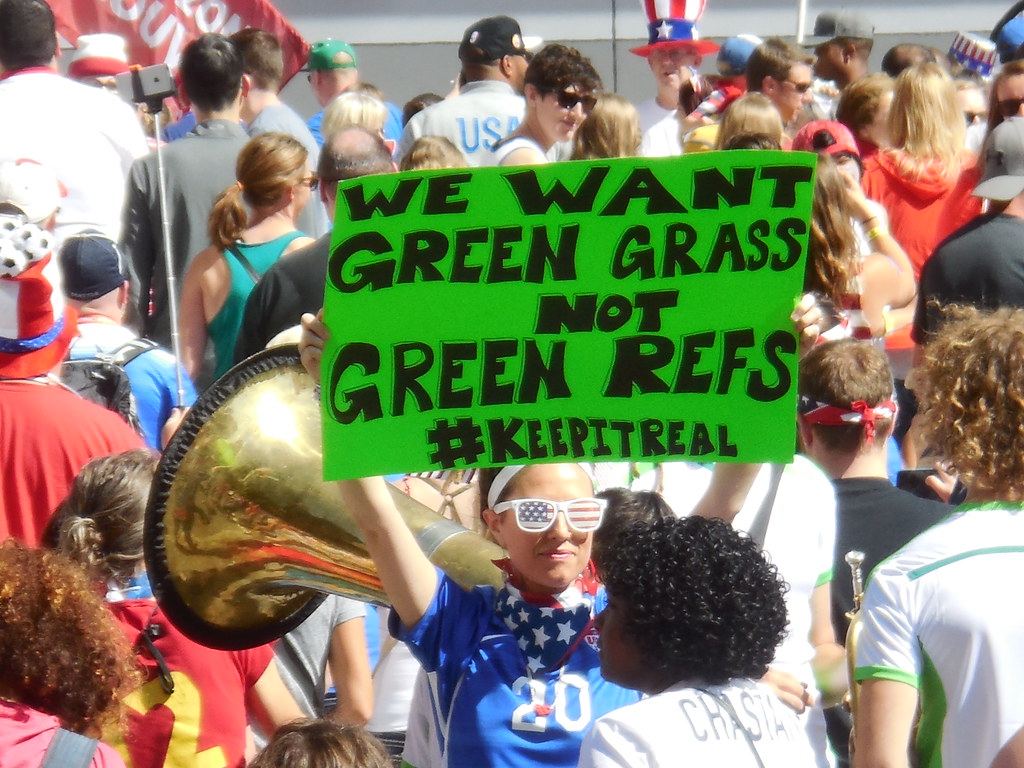 A fan calling out FIFA's “turf war” at the women's World Cup this month in Vancouver, BC. Photo by Troy.

At FIFA, sexism trickles down from the top. Who better to set the tone for the federation’s gender disparity than self-proclaimed “godfather” of women’s soccer himself, Sepp Blatter? Known for advocating tighter shorts as a marketing idea for women’s soccer and for not being able to recognize top female soccer stars at the FIFA awards banquets honoring them, Blatter is currently in the news for other scandals. On May 27, US Attorney General Loretta Lynch announced the arrests of 14 FIFA officials and executives on charges that include racketeering and money laundering. The soccer officials stand accused of accepting over $150 million in bribes in what the FBI calls “a 24-year scheme to enrich themselves through the corruption of international soccer.” A week after the news of the corruption charges broke, Blatter resigned. All this news on the eve of the women’s World Cup has created a strange mélange of international soccer coverage that threatens to overshadow a sport that already doesn’t get enough media coverage.

Sports writers, soccer officials, and fans have been creating a narrative in which women and the women’s World Cup are the redeemers of FIFA—the bastions of hope in a corrupt soccer world. As Victor Montagliani, president of the Canadian Soccer Association, said at a World Cup press conference earlier this month, “Women can bring light to the sport.” Or as sports commentator Eoin O'Callaghan summed up, “Women’s soccer is… about spirit, it’s an honest endeavour. And maybe it’s a tournament that can save FIFA.” Even in some articles highlighting the long history of FIFA's sexism, there is a counterpoint in which the women's World Cup plays the role of FIFA’s image cleanser. This is the case in a recent USA Today article headlined “FIFA's Bad Image Could Get Boost From the Women it Ignores“ despite the fact that players interviewed in the piece talk about wanting to distance the World Cup from the organization.

FIFA is leaning on the athletes who play for the love of the game—not fame and self-enrichment schemes—to bolster its image. But athletes playing in the World Cup shouldn’t be saddled with the job of polishing up FIFA’s image—just as the women’s World Cup shouldn’t serve as a deflecting shield for FIFA's bad press. The athletes at this year’s World Cup have their own agendas and motivations separate to that of saving the public image of an organization that essentially put its fingers in its ears and hummed loudly when the world’s top female players requested, then demanded, then sued, to play on grass fields rather than artificial turf. When the athletes needed respect from FIFA, the organization ignored them. Actually, they did worse than ignore them: FIFA reportedly threatened to retaliate against players who participated in a lawsuit over having to play the world cup on artificial turf. Classy, FIFA. 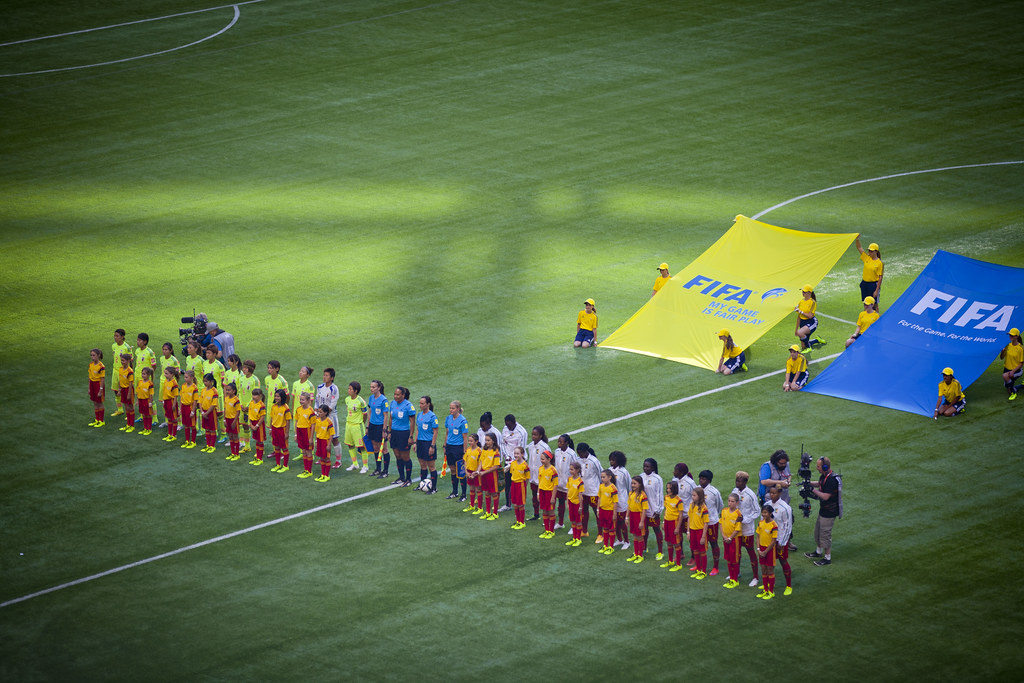 What FIFA should do to improve both its image and the sport of soccer is support women’s soccer leagues and hire more women to its currently male-dominated management. Only 23 percent of FIFA Member Associations have dedicated staff for women’s soccer despite the fact that 78 percent of the groups have women’s soccer leagues. Women didn’t even serve on any FIFA executive committees until 2013. Now, Moya Dodd, chairwoman of the FIFA Task Force for Women’s Football and one of three women on the executive committee, is proposing to hold the first ever FIFA-endorsed Women’s Club World Cup in 2017—that would be a tournament held between the top clubs of each league. What that would mean is more exposure for women’s clubs around the world, which would put pressure on their organizing bodies to support and develop them more—not just spotlighting the national teams.

Because the World Cup is the best marketing tool out there for promoting national leagues, a lot is riding on it for countries where women want to be playing soccer at a more professional (club) level. The U.S. is one of those countries. Despite consistently ranking high since the first women’s World Cup in 1991 and winning it twice, two U.S. national women’s soccer leagues have folded. In her recent ESPNW article, Julie Foudy does an excellent job of explaining what it would take for the third iteration of a U.S. women’s national soccer league to succeed. In short: To stay afloat a league has to make enough revenue. And in order to make enough revenue there has to be a market for the league. How do you inspire people to watch women’s soccer matches in bars and pay for tickets to games, which in turn inspires sponsors and companies to buy advertising slots? Well, winning the women’s World Cup—the first one to be fully televised on network television in the U.S. in 11 years—could certainly help. All women’s sports are fighting an uphill battle when it comes to media coverage: Networks only devote about three percent of their sports coverage to women’s sports.

If getting more women into governing roles at FIFA would mean the organization would be less corrupt, that’s great. But saving FIFA from its years of mismanagement should be secondary to the goal of diversifying FIFA’s ranks for the sake of better promoting the development of women’s national soccer programs and youth programs, funding women’s programs, and connecting the women’s World Cup and women’s national programs. And maybe even gender parity within the organization and between male and female athletes’ pay and playing conditions, too.

So, while it’s a beautiful thing that women play the beautiful sport for the love of the game, let’s not let gender disparity be the reason they play the sport solely for the love of the game, unlike their male counterparts who regularly earn exponentially more and play on cool springy grass instead of 120-degree turf. Let’s not point out the double-entendre of the “fairer sex” and see women as the great white hope of FIFA, redeeming it of its corrupt ways—even if it’s true that only good things could come from their inclusion in the organization. If FIFA wants to be redeemed, the organization should start by rethinking its own sexist policies. It’d be better for the sport—not just for FIFA’s image.

Related Reading: At the World Cup, FIFA's Sexism is in the Spotlight. 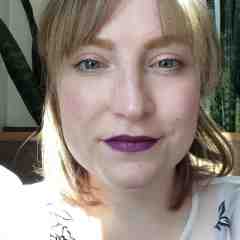 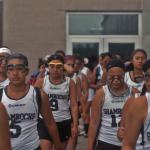