At the World Cup, FIFA's Sexism is in the Spotlight | Bitch Media

At the World Cup, FIFA's Sexism is in the Spotlight 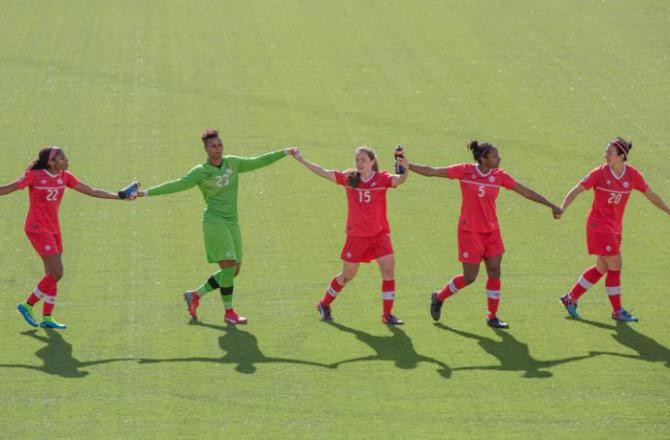 The Canadian national women’s soccer team at a World Cup match this weekend. Photo by IQRemix.

In 1991, international soccer organization FIFA held the first-ever official Women’s World Cup. Though it sanctioned the event in Guangdon, China, FIFA seemed wary of the tournament: Teams played 80-minute matches (instead of the typical 90 minutes) and there was serious consideration of using a lighter ball. It wasn’t even called the Women’s World Cup, it was called the “First FIFA World Championship for Women’s Football for the M&M’s Cup.” What a mouthful. Even though world-class teams from 12 countries competed in the event, media coverage of the Women’s World Cup outside of China was nil. But despite all that, attendance was great—over 500,000 people attended the matches in stadiums around China.

In 1996, women’s soccer finally became an Olympic sport and the 1999 World Cup involved a marketing push the likes of which the game hadn’t seen before. Organizers wanted to sell out huge American venues with over 50,000 seats. Total attendance topped 1.1 million and the Rose Bowl was filled to capacity for the final match between the United States and China. The photo of Brandi Chastain celebrating her game-cinching goal became iconic instantly.

And that’s when FIFA probably realized there’s gold in them thar hills.

Modern women’s soccer doesn’t yet approach the hoopla surrounding the men’s game, but it does have a steady increase in funding and prizes, several top-flight pro leagues, greater broadcast coverage, and a sense of prestige surrounding its top prizes, like the World Cup, the Olympics, and the Euro. With the advent of consumer access to the Internet, suddenly women’s soccer no longer existed in isolated pockets. The Internet consolidated scattered support into a more cohesive voice that demanded both media and broadcast coverage. Where demand exists, advertisers are sure to follow, and once ad dollars started to flow into the game in the form of commercials and endorsements, the engine ticked over and started pumping fuel.

But 15 years after that astounding 1999 match, women’s soccer is still making slow progress toward being fully supported by FIFA, advertisers, and media outlets.

Media coverage of women’s soccer leaves a lot to be desired, too. First of all, there’s a lack of coverage of women’s sports, including soccer: an analysis found that out of an entire year of broadcasting, SportsCenter devoted just two percent of its airtime to women’s sports. Astoundingly popular EA Sports video game series FIFA is just now getting around to adding female players, just in time to capitalize on the 2015 World Cup. Even though the mainstream media has generally moved away from overtly cringe-inducing reporting on the women’s game, there’s still missteps like Fox Soccer, the broadcaster of the World Cup, comparing Louisa Necib to J. Lo in a list of 10 players to watch. There’s also your run-of-the-mill sexism from whiners who can’t seem to adjust to women moving out of their neat little domestic spheres and doing whatever the hell they want, like an out-of-touch rant from a New Zealand hack which I won’t link. What I will link instead is Kate Fagan’s excellent rebuttal at espnW. There’s British Sky Sports commentator Andy Gray, who was sacked in 2011 for making wildly sexist comments about ref Sian Massey, rehired by a different media outlet a few years later, then promptly caught chanting “get your tits out for the lads” at a female sports reporter. And don’t forget your standard “hottest players” list, like the one published this week by the Toronto Sun. 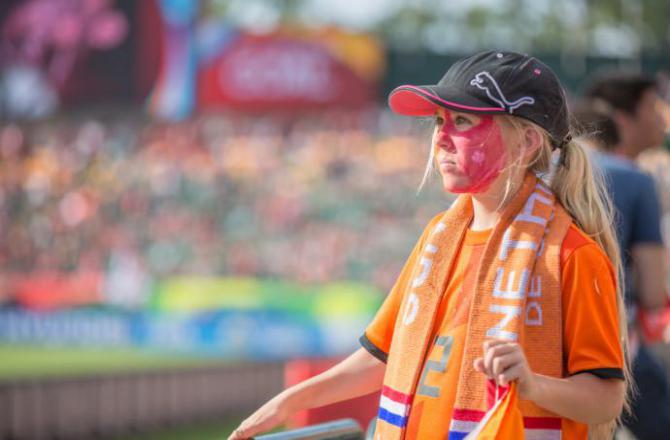 A young fan at the World Cup match between The Netherlands and New Zealand. Photo by IQRemix.

A lot of this sexism around treatment of women’s soccer both by the media and by FIFA is, obviously, a function of social and cultural resistance to the inclusion of women in a traditionally male-dominated sphere. Early World Cup coverage came with reassurances that despite playing soccer, female athletes were definitely women who loved being women. Ponytails and sweetheart stories—while not inherently bad—were the only thing you saw covered. Too butch, too aggressive, too loud, and you weren’t marketable. Until very recently, it really, really, really wasn’t cool to associate queerness in any form with women’s sports. When tennis legend Billie Jean King was outed in 1981, she lost every single one of her endorsement deals within 24 hours. Decades later, there is also pressure within women’s sports not to come out because to do so is to reinforce the stereotype of all women’s athletes being gay. FIFA dogpiles onto this harmful notion with its required gender testing, which it mandated across all soccer teams in 2011.

Gender testing is, of course, bullshit hiding behind a thin veneer of faux-concern for players’ health and safety. It is born out of outmoded gender roles that don’t believe women can play sports and still remain women. Someone who is too fast or too strong could be a man. Someone who doesn’t look like the socially acceptable physical construct of a woman could be a man. Someone who does something traditionally done by men is not normal. Gender testing is a way to intrude into a person’s private business in a horrifically embarrassing manner and an absolutely terrible way to weed out the nonexistent epidemic of men pretending to be women in order to gain an athletic “advantage.”

Tying in to this social resistance is the hierarchy of FIFA itself. Governance of football is heavily male-dominated and has been since its founding in 1904. Lydia Nsekera was the first woman to join the executive committee in 2013—that’s 109 years of dudes calling all the shots, including those that affect women’s soccer. Across the board, women have a hard time getting into powerful roles in soccer’s bureaucracy. For example, among the teams of the top-30 ranked nations, there are just six female coaches. When a group of international players sued FIFA for making them play on artificial turf, the organization reportedly intimidated several players into leaving the lawsuit through the players’ controlling federations. 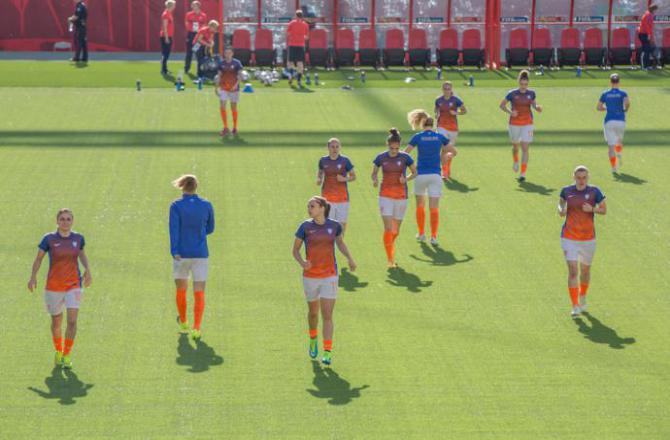 Players spoke out against playing on artificial turf at the World Cup, saying it is harder on athletes’ knees and joints than natural grass. Photo by IQ Remix.

True, chief Sepp Blatter has been delivering a fairly steady if slow spiel about needing more women in the game. This is also the man who as late as 2008 was still unaware that women’s soccer was played with same size ball as the men and has, at various times, been unable to recognize FIFA World Player of the Year nominees Marta and Alex Morgan.

Change—real change—at the top is important. Now seems like the time to do it, with FIFA officials getting snatched by police left and right and no doubt being implored to flip like pancakes on their overlords. Even Old Faithful himself, Sepp Blatter, is theoretically resigning in a few months’ time.

So what to do? Waiting for cultural change to prompt structural change is slow and tedious for women’s soccer fans. The entities in the business of packaging and selling soccer are reluctantly becoming aware that there is profit to be had but if we wait for the zeitgeist, we’ll be a long time waiting for a train that might not arrive.

Attacking this problem is going to require several approaches that encompass not just players advocating for themselves in whatever way possible, but coaches, staffers, admin, and media giving women’s soccer its fair due.

At the highest level, FIFA should mandate that any federation bidding on an event like a World Cup should be required to include their women’s national team in their broadcast deals. For example, if the United States bids on an event, part of their bid should be making sure that when they sell the rights to a broadcaster like ESPN, they must guarantee that a minimum number of women’s national team games get broadcast over the lifetime of the deal. FIFA must expand education programs for coaches and referees and should create grant programs for women in soccer media to get training and create content. FIFA should also considering implementing a system similar to Title IX, where entities that receive FIFA funding must either provide equal funding to both men’s and women’s sides or demonstrate that they have satisfied the actual needs of their women’s side, with basic standards like living wages, health care, proper training facilities, equipment, and travel included as a baseline.

There’s no doubt that with proper funding and planning, women’s teams can make huge leaps in progress. Look at Japan, winning a World Cup an entire cycle ahead of schedule. In the 2007 World Cup, Japan’s women’s national team didn’t even make it out of group stage. Their federation created a long-term plan for success in women’s soccer, which required investment and development through every level of the system, and put it into place. Four years later, their women’s team took home the top prize at the 2011 World Cup. Other nations in the Asian confederation are now chasing Japan’s success.

There’s also a need to continue the shift toward celebrating female athletes who are not just queer, but queer outside the safely proscribed model of queerness that mainstream society is prepared to accept. That means non-gender-conforming, agender, butch, masculine-of-center, or any other expression of queerness. Recently, there has been a steady stream of players who are now coming out as queer, like Tasha Kai off-handedly revealing she had a girlfriend, or Megan Rapinoe coming out in a blaze of glory, or Nadine Angerer shrugging that she has no gender preference when it comes to dating. Media are starting to get the message, as in when they simply refer to Sarah Huffman as Abby Wambach’s wife and move on without any caveats or explanations.

Meanwhile, some outlets have realized that the media market is due for a flood of female commentators and analyst. The 2015 World Cup has been a boon for numerous international soccer players who have been hired as broadcast commentators: players like Angela Hucles, Danielle Slaton, Leslie Osborne, Kelly Smith, Christine Latham, Monica Gonzalez, Heather Mitts, Ariane Hingst, and Cat Whitehill. Meanwhile in England, the BBC has assembled a decent female broadcast crew around powerhouse sports broadcaster and Women in Football founder Jacqui Oatley, including players like Sue Smith.

When a federation treats its women’s team like it matters, or when a broadcaster devotes equal time to a women’s game, or a newspaper puts female players on the front page, it sends a cue to those who follow soccer that they should treat women the same way. When players get the support they deserve, the quality of the game increases drastically, and when the game is good, we all win.

Stephanie Yang is a Boston soccer fan who has been following the game since 1996.

Steph Yang is based in Boston and writes about women in sports and media.