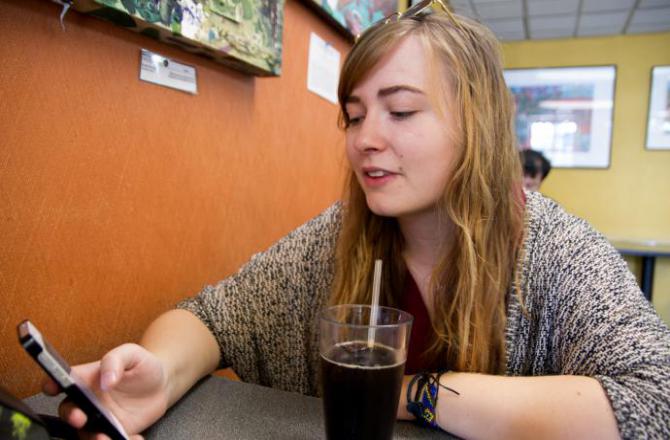 I’ve always been a late social media adapter. In middle school, I refused to get my own Facebook account and now that I’m in college, I didn’t get a Twitter until I had to for “journalism.” That’s why I was pretty confused when I started hearing people on my campus talk about “Yakking.”

They were referring to the latest social media app to hit the market: Yik Yak. The app is a lot like Twitter, where users post 200-character Yaks that others can vote on and reply to. Yakkers can gain reputation points, which are of course called “Yakarma,” through upvotes.

But there are two things that separate Yik Yak from Twitter. For one, Yik Yak is local: you can only see Yaks posted within a 10-mile radius. Consequently, the app is mainly active on college campuses, where there are lots of young, smart-phone-loving people in one place. But the big difference is that Yik Yak is also totally anonymous.

Not surprisingly, the app was founded by two frat boys turned entrepreneurs, Tyler Droll and Brooks Buffington. Since launching in November 2013, Yik Yak is now active on more than 1,000 universities around the world.

Yik Yak prides itself in keepings its users private. According to Yik Yak’s website, “Anonymity levels the playing field. It gives people a blank slate to work from, removing all preconceptions about them.” 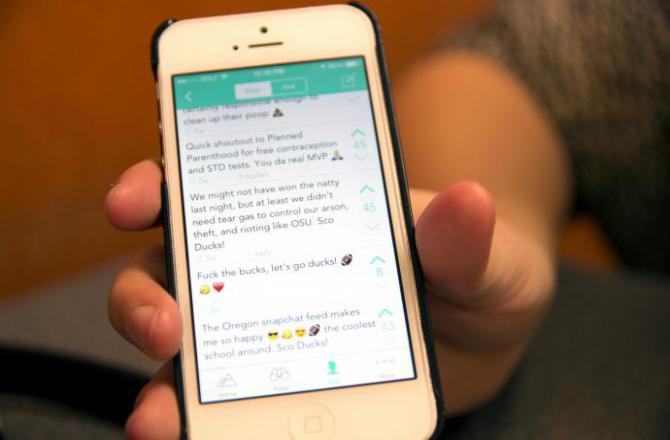 Media coverage of the app has focused on the use of Yik Yak in high schools and students being bullied or gossiped about. Some high schools have even worked with Yik Yak to ban it on campuses. But at colleges, Yik Yak has become a beast all of its own. On college campuses, Yik Yak has been used as less of a source for gossip about last night’s party and more of an outlet for students to express racist, sexist, and homophobic sentiments and go unpunished.

“Backstage racism is always going to be a problem because people are inherently more comfortable saying these kinds of things with people that look like them instead of the general public,” said Lia Joseph, a student at Hollins University in Virginia. “I think Yik Yak gives them more of a platform to discuss and agree with things without fear.” Joseph and other members of her university’s Black Student Union experienced a racist backlash from Yik Yak users after they staged a die-in on campus as part of the #blacklivesmatter movement.

“We created a place for constructive conversation to happen and apparently some students on campus did not like that and began posting on Yik Yak,” said Joseph. “They just got progressively worse to the point where people began to say that the black students didn’t belong on the campus.”

Joseph and other students met with the administration and informed them about what happened on Yik Yak and the issues students of color faced on campus. While they were able to have productive discussions, Joseph said students still use Yik Yak because they don’t face any consequences for what they post.

“As much as we would have liked for there to have been repercussions for the students that said the derogatory things, there was no way that we could trace them,” said Joseph. 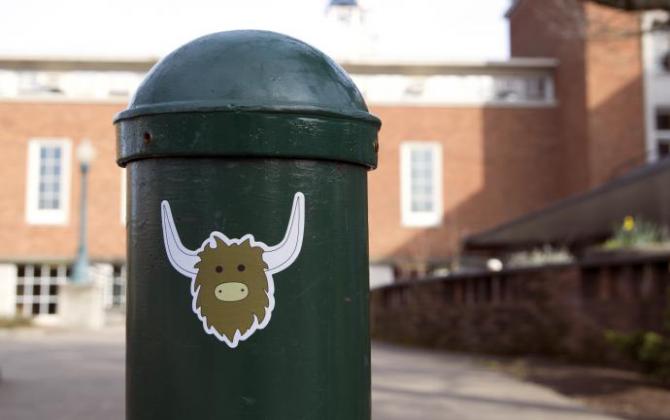 Yik Yak’s logo has been popping up around college campuses.

Hollins isn’t the only university where Yik Yak is used to attack student groups. Schools around the country are grappling with how to deal with the ugly thoughts Yik Yak makes apparent. At Stanford, 25 percent of 131 Stanford freshmen surveyed described the app as both “funny” and “offensive” simultaneously. The president of Grinnell College sent out an email to students last month condemning racist Yaks targeted at black students and students at Gustavus Adolphus College printed off and posted a selection of sexist Yaks for a recent conference on rape culture. Technology podcast, Reply All, did a whole episode on nasty Yaks posted about protests by students of color at the predominantly white Colgate University. Unlike at Hollins, students at Colgate contacted Yik Yak about the racist Yaks that followed student protests, but the folks at Yik Yak offered no help.

According to Yik Yak, it is up to users to maintain “the herd”—any Yak that gets downvoted five times disappears. But should it really be up to the people posting bigoted comments to monitor each other?

I had been a passive user on the app for a few months, but I wanted to “join the herd” to really see how it worked. I decided to start simple and Yakked “How do you define feminism?” And after one snooty comment, my Yak was quickly voted off. I was a little crushed. I saw stupid Yaks get hundreds of upvotes, but my gender studies 101 question got booted off. But it got worse.

One thing you can do on Yik Yak is add a themed handle, kind of like a hashtag, to your Yak. After my Yak, the “feminism” handle started gaining popularity, but for all the wrong reasons. My Yak became a way for users to be sexist assholes and get away with it. 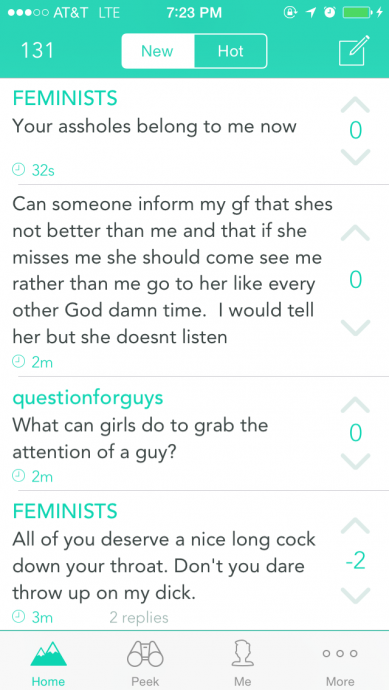 Next, I decided to post about safety on campus in general. That worked alright—I was able to start an interesting discussion on the issue, and I got nine upvotes. 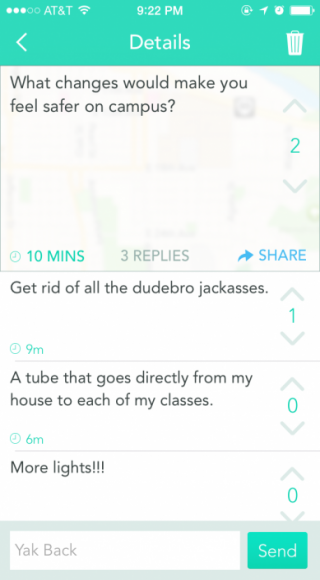 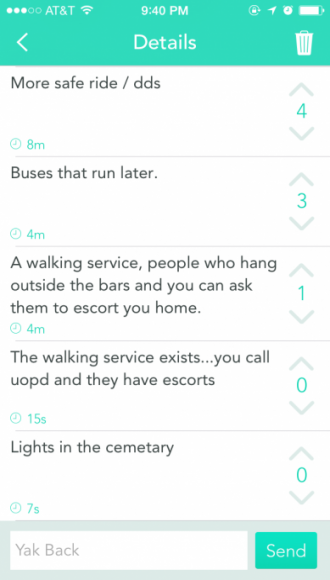 “If you try to tell people how to think or what they should be doing right now, or what’s right or what’s wrong, they react viciously,” Sian Kavanagh, a recent journalism graduate from the University of Oregon and a frequent Yik Yak user. Kavanagh suggests writing Yaks that people can relate to and that can then start a dialogue.

And she knows what she’s talking about. Kavanagh starting using Yik Yak last fall, right after it became available at the university. As a journalism student focusing on social media, she was fascinated by the micro-communities the app creates. Since graduating, she still uses the app and is convinced that despite the negativity, positive Yaks will always get more traction.

“It’s a very silly source of procrastination, but I definitely think it has added a safe space to be vulnerable, to show your nerves and to show your doubts and your fears,” said Kavanagh. “It is a place to come in case you need reassurance and a laugh.”

But I still wondered, could Yik Yak actually create a space for productive conversation beyond weed jokes? Kavanagh thinks so. She recently gave Planned Parenthood a shout out on Yik Yak for the incredible work they do and had multiple comments asking about the resources it provides. She also brought up an example of Yakkers posting negative comments about the women’s-only hours at the university’s rec center.

“People were up in arms, but the [Yik Yak] community didn’t let those posts ever get too far,” said Kavanagh. “It brought up this discussion of gender, culture, religion and race.”

I’m pretty divided on the app. Most of the Yaks I see aren’t directly racist or sexist, but rely on stereotypes and generalities for the punch line. While Kavanagh pointed out that the Yik Yak is not unlike other social media sites like Reddit and 4chan, I don’t use those sites because of what people say behind anonymous computer screens.

But I guess that’s the problem with social media. For every supportive comment, there’s a troll who wants to crush it.  I’m not convinced that the racism at Hollins, Colgate and other universities was perpetuated by Yik Yak, but the app gives those voices a platform. For Yik Yak to become a safer community, it cannot rely on the herd to self-regulate. The app has the potential to use its anonymous ethos to promote discussions that students might not feel comfortable having in person, but these conversations can never happen when the next Yak is about all the hot bitches at a party.