"You Need to Fall in Love With Story": An Interview with "Carrie" Director Kimberly Peirce | Bitch Media

“You Need to Fall in Love With Story": An Interview with “Carrie” Director Kimberly Peirce Director Kim Peirce and the blood-soaked poster for her new film, the Carrie remake.

Filmmaker Kimberly Peirce is a crusader. Like the protagonist of her latest film, Carrie, Hollywood has failed to bully her around. She’s kept at the business and art she loves, despite being passed her over for major projects and has carved out her own success, taking the helm of unconventional films like Boys Don’t Cry and Stop Loss. During her long career, she’s also been an outspoken voice against censorship—as best seen in This Film is not yet Rated—and, in her free time, directed an episode of The L Word.

Peirce spoke with Bitch about her history with Carrie White, the appeal of revenge stories, mother-daughter relationships, and filmmaking while female.

MONICA CASTILLO: What drew you to remaking Carrie’s story?

KIMBERLY PEIRCE: I had read the Steven King book as a kid. I was a literature student at University of Chicago, and I think I reread it around then. I love Steven King, but I’m blown away by just how great and entertaining the writing is. I fell madly in love again with the character of Carrie White. I love that she’s a misfit and an outcast who wants love and acceptance, which is what we all want, but has to face these extraordinary obstacles to gain that satisfaction.

Particularly, when the girls at school give her a hard time. She has a wonderful relationship with her mother that’s complicated and fraught with conflict. Her mother loves her, but will repress her from sinning and going out into the world. I fell in love with the relationship between them, but also where Carrie goes with her powers. As a disenfranchised person, I loved that when she discovers her powers, it became her way of being okay in the world, like the way any of us has a talent or seeks that thing that makes life bearable. The powers made her life bearable; they make her feel like everybody else—she felt so disempowered.

I loved the complication of the boy asking her out to prom. We know that Sue shouldn’t have offered her boyfriend to Carrie. We know that’s a disaster in the making. We know Carrie shouldn’t say yes, but Carrie so desperately wants the Cinderella evening. She wants what we all want.

As a writer/director, I knew, “Wow, this is a great story.”

Did you feel the need to revisit Carrie’s story since it seems we’re talking so much more about bullying than before?

I think what’s so amazing about the novel: It’s so fantastic in its era but, in the way classic literature works, it’s even more timely and relevant now in terms of human relations, in terms of human empowerment, in terms of revenge, and particularly in terms of how people relate to one another. I’m amazed in just the last five years, we all have a cell phone camera that takes pictures, records things, and makes videos. We are no longer content to just experience things, we have to record it and put it onto Instagram, Facebook, or Twitter.

If you look back at human history, I believe we’ve always needed to communicate, and this is just one new facet of that. But in that communication, what good or harm has it done? In my adaptation, we’re deeply involved in the modern world. When the girls reject Carrie, a video gets made, uploaded, and disseminated out there that causes more harm to Carrie. That stuff was so rich, so necessary to me.

I want to jump back to the mother-daughter relationship in Carrie. I found an old quote from you claiming, “I think girls need to break up with their mothers.” I’m guessing this applies to Carrie’s case?

What I probably should have said is that people need to break up with their parents. The process of individualization requires that we’re deeply meshed with our parents, but at some point break free. If I’m going to point a light on mothers and daughters, my own and also all my friends’, it seems like mothers and daughters have such an amazingly tight pact with one another. Probably because the mother is the maternal one and she’s usually the first and primary caregiver, and their bodies are similar.  I think women are disempowered in our society and that causes bonding. It’s so rich and fascinating.

It’s the heart and soul in my movie. I really focused on it. I wrote and added a new scene at the beginning about their relationship. Grounding the movie in this mother-daughter relationship is how my movie works. It’s somebody in a quest for a need, up against obstacles, and that becomes the fuel in the engine that drives it all the way to the climax, which I also rewrote and readapted so it was a much stronger fight between them. So the mother’s trying to kill herself and Carrie is trying to save her life. It’s much more intense, and I think that’s what people want, that satisfaction.

And then there’s Carrie’s revenge.

The key to making this movie work is make the audience fall deeply in love with Carrie White. Even though she’s an outcast, even if she’s the disempowered, they have to love her. Even if they [the audience] feel like they’re not misfits in real life, we had to make it that you fall in love with Chloe Grace Moretz (the young actress who plays Carrie) so that you’re inside the scenes when people are giving her a hard time. She is annoying, she is out of it, but you’re engaged in that dream of wanting that Cinderella night, wearing a beautiful dress, going out to a ball, be with a boy, wanting to have it all.

But you also have to pay attention when it all starts to go wrong. You have to root for Chris, the bad girl, to make it all come crashing down so that you could root for Carrie to get her revenge. That’s the revenge of the underdog, and that’s so important because the revenge story can only work if you love Carrie and relate to her.

What’s it like to recreate this very female-centric story in a year, which until recently, didn’t have many films starring women?

I think it’s great that Carrie is so female-centric. For me, I love that we have a female protagonist, we have a mother-daughter relationship that’s the main love affair, we even have Carrie relating with Chris and Sue, who feels guilty and offers [Carrie] her boyfriend. She does what privileged people do, which is give charity. I love that Chris feels that every time Carrie gets support from Sue, her father, the principal, she escalates her attacks. How the two girls are using their boyfriends to do what they need done: Sue asks hers to take Carrie to the prom and Chris, while giving her boyfriend a blowjob, asks, “Will you help me in this thing against Carrie?” I love that there’s two heterosexual sex scenes that get interrupted so the girls can talk about Carrie. I don’t think we’ve ever quite had that.

Would you call Carrie a feminist film?

It is a feminist movie in so far that it’s about the underdog, and that’s essentially what feminism looks at.

Do you like siding with the underdog in a story?

Well, they are the favorite to survive a horror movie…

What’s great about a great character and story is not only do you get a good opening weekend from people who love horror, but general audiences love a good story and that’s why they go back to these stories over and over again. There’s this great film called Shock Value that talks about Polanski, De Palma, and Hooper, and all those guys in the 70s really coming into the horror genre when people weren’t paying attention to it. They dug in there and they made these classic movies that have endured. I think that’s happening again. Audiences want horror, and they’ll go to horror that’s not that good. If you give them something good, they’ll come back, and they’ll talk about it.

That’s what we did with Carrie. We have a horror film you’re going to go to and we’re going to try and make this as good as we can to satisfy you. Hopefully with a great relationship and great acting, with an amazing revenge story, and with a girl with superpowers. I think people will have a good time seeing it. If we do it right.

Last question: what advice would you give younger female filmmakers?

Go ahead and take that class, learn whatever you can. I was very fortunate; I went to grad school and the Sundance Institute. I took classes for three or four years with great teachers. You can never know too much about this art form. It’s an art, it’s a business, and it’s amazingly challenging. You have to know a lot about life to do it. You’ll work with a lot of smart and sophisticated people who are brilliant and wonderful.

I would say this to anyone today, in particular to women: learn everything you can. Pick up a camera, write, assist, tell a story, shoot a story, edit it, and show that story. Get feedback and never be afraid of criticism. Be as collaborative as you can with everyone around you. We’re all born storytellers, the human experience is telling stories. People do all kinds of stuff, and they have audiences everywhere. Let yourself get better and better. You can be great; you can have a career. It’s hard but there are awesome filmmakers out there, whether it’s Kathryn Bigelow, Catherine Hardwick, or Jane Champion. They’re all fantastic filmmakers. Know you really want to do this. This is how it is with any climate of difference and they don’t have a history of making it into that business. We’re going to change that.

Watch the trailer for Carrie and read our review of the film.

Relevant: “Bad Moms” Is Even Less Funny Than You Could Possibly Imagine 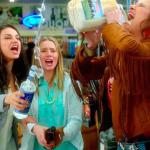 by Jess Kibler
Marketed as catharsis for under-appreciated moms, the film is actually written for teenage boys.