Beaker Bitch: You Run Like a Man! | Bitch Media

Caster Semenya is fast and strong and far from dainty. When it came to light last week that an athletic organization was secretly testing her sex, the sports world and mainstream media got a refresher course on an important reality: while our society tries to strictly divide people in male and female, the science of sex is far more murky.

South African Semenya is shaping up to be one of the fastest runners in the world, but if the International Association of Athletic Federations' (IAAF) forced battery of tests (including a gynecological exam) finds she's too "male", she could be stripped of her medals. The IAAF stopped mandating the outdated sex tests for athletes back in 1992 and the reasons for testing Semenya range from fairness to racism, depending on who you ask. 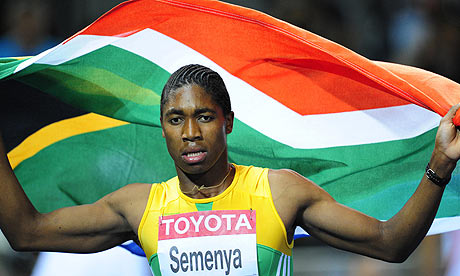 Over at the Huffington Post, Jane Devin points out that males whose genetics make them sports stars are groomed and applauded, not subjected to embarrassing tests. You have to ask—if Semenya had thinner shoulders and a more delicate chin, would her competitor's allegations ("Just look at her," sniped a fifth-place finisher at a recent race) be given legitimacy for even a second? I think not.

And, in fact, science has. Scientists now know that a whole array of factors play into sex and that our bodies' hormones and physiology often don't line up into neat male/female lines. As New Scientist explains, some women possess male Y chromosomes, but that doesn't necessary make them stronger athletes. Another HuffPo article notes that to determine whether 1970s transgender tennis champ Renee Richards qualified to play in the female league, her doctor used a wide range of information—not just her genital appearance and endocrinological makeup but the way she was socialized and how she identified.

What if Semenya has male chromosomes but female genitalia? What if her testosterone is high but she also gets a period? As more and more people come to identify themselves in the gray area between male and female, the IAAF risks disqualifying talented athletes if it does not start thinking of how to deal with sex as a spectrum rather than a set-in-stone binary.

Honestly, I think the world is becoming madder than it used to be!
I never agreed with the idea of sport competition for women and sport competition for men.
First because we all have male and female hormones inside us, and, if a man has feminine features, in ice skating, is applauded like you say, why should a woman with more masculine features than the rest, like Semenya, be considered for a battery of tests regarding her sexuality?
Second, although race issues are no longer a really hot subject in sports, why do they insist in classifying different both genders? It's already proved that the human body capacities is not related with the gender.
These actions regarding Semenya are a "no-no" for the IAAF ! Let the woman run!

( P.s- English isn't my first language, so If my words are not completely clear, my apologies)

gender testing? gender is a social construction, whereas sex is biological. therefore I am a little confused of how they plan to test for gender? Check out her closet, and her shopping or dating habits? If she is a female who identifies with the male gender does this disqualify her? Will she fail the gender test?
This is insane and insulting for this woman. It is sad, that people can't accept their loss and celebrate in her victory. It is also sad that in today's society women's accomplishments are still second guessed in disbelief by a male dominated society that feels threatened by a woman's success. 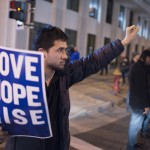