You Scream, I Scream, We All Scream for (Gay Marriage) Ice Cream! | Bitch Media

You Scream, I Scream, We All Scream for (Gay Marriage) Ice Cream!

As if gay marriage weren’t sweet enough already, Ben & Jerry’s and Freedom to Marry have teamed up to present us with Hubby Hubby, a renamed version of their popular peanut butter & pretzel-y ice cream. Check it out: 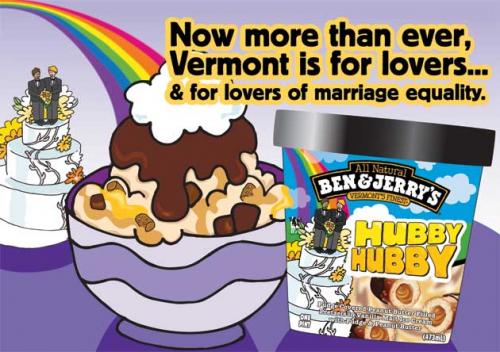 Isn’t that just the sweetest thing?

It appears that the flavor is only available in Vermont at the moment, but the gesture is getting nationwide attention. Says Evan Wolfson, executive director of Freedom to Marry:

It’s not polite to talk with your mouth full, but the most important thing that all us ice cream lovers can do to support the freedom to marry is speak with the people we know about why marriage matters and the need to end marriage discrimination in every state. Thanks to Ben & Jerry’s, starting those needed conversations has never been sweeter – and thanks to Freedom to Marry, we all now have a great excuse to eat more ice cream.

Ice cream AND marriage equality? Deeelicious. Now how will they come up with a lesbian flavor? Wifey Wifey just doesn’t have the right ring to it. Any ideas?

I quit eating Ben & Jerry's cold turkey as soon as I learned the <a href="http://www.unileverusa.com/ourbrands/foods/benandjerrys.asp">multinational Unilever</a> bought them awhile back. The last thing I wanted for, what started as a quite progressive food product company, was to become a part of the corporate processed food industrial-complex that Unilever is a considerable fraction of. My health has actually improved since I quit eating B&J ... one can live without buying into 'em

Thanks, B&J! I just wish I were close enough to enjoy the flavor myself. As for the issue raised by other comments: you can call it co-opting if you'd like, but the same accusation can be made toward any queer-related product (including those from specifically queer companies,) and I think this is a brave move for such a famous brand considering how many hatemongers are still in this country.

Vermont is a great state. There are a lot of open minds up there in addition to the state's having all that 'Maple Syrple' they can put on the ice cream. If Ben and Jerry are going to have an equivalent for lesbians do you think they might sell more ice cream calling it 'Mommy Mommy', .... or do you think their kids saying 'Mommy, mommy' too much wanting ice cream would drive lesbian couples batty?