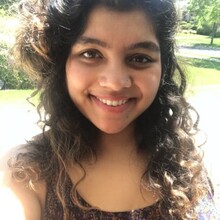 Agni has over 10 years of experience in teaching writing to people of all ages. She currently teaches at The Octavia Project, a Brooklyn-based writing, science and arts program for teens to imagine and build new worlds in the legacy of Octavia E. Butler.

She hails from Madison, WI. Notably, she worked at Simpson Street Free Press, where she taught writing-for-publication to students aged 9-19, and assistant-produced at Wisconsin Public Radio.

For four years, she co-directed and performed in Yoni Ki Baat, a performance showcase of the intersectional stories of women and non-binary people of color. Inspired by the needs of that collective, she founded the intersectional feminist zine, Brown Girl Lifted, in 2015. She moved to Brooklyn in 2017 after her state turned red.

She received her MFA in Writing & Activism at Pratt Institute in 2019. Her written work has appeared in The Madison Times, The Daily Cardinal, Wisconsin Center for Investigative Journalism, Wisconsin State Journal, WearYourVoice, Bitch Media, The Felt, McSweeney’s, Nightboat Books’ blog, among others.

Aarushi performs comedy and music all around New York City, and the world. As a comic, she’s opened for renowned stand-ups including Jackie Kashian, Maggie Faris and Aparna Nancherla. She’s performed at the 2020 NYC Asian Comedy Festival and the Lady Laughs Festival in Madison, WI.

Until the quarantine, she hosted a monthly stand-up comedy showcase “A Slice of Funny” in Manhattan. She writes and performs sketch comedy with Overstep Comedy. The group headlined the Asian Comedy Festival, after a year of oversold shows and a residency at the Peoples Improv Theater in New York. She continues to act and write video sketches. She appeared in, and composed music for, the 2020 film Poets are the Destroyers, and wrote for the award-winning teen web series, SociCircle.

A gifted singer/songwriter, she’s made music with several groups including Tin Can Diamonds, The Rose Lights, Hyper Beam, and Little Curl, some of which you can find on her Soundcloud. Aarushi is no stranger to curating, hosting and performing at happening nightlife events, for packed venues. Her folk-blues band Tin Can Diamonds is streaming everywhere.

She has also been featured on numerous radio programs and podcasts including Hyphen, WORT’s A Public Affair, The Jimmy K Show and How To Be Less Awkward with Laura Merli.  She is a 2018-19 recipient of Pratt Center’s Taconic Fellowship for As Told, an oral histories project documenting the lives and journeys of Brooklyn seniors, and co-editor of a book about the project, As Told: Brooklyn Stories.