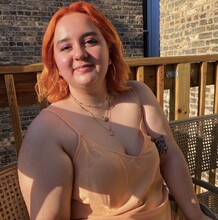 Alani Vargas is an entertainment journalist originally from Chicago. After graduating from Northwestern University, Alani’s work appears on Vogue, Bitch, POPSUGAR, Bustle, The A.V. Club, with a big emphasis on reality TV, Marvel, Star Wars, and pop culture in general.

While Alani loves a good WandaVision or Anakin Skywalker edit, she loves great Harlivy fanfic even more as her guilty pleasure. Her favorite movie genres include horror and rom-coms, with her favorite movies of all time being a tie between Imagine Me & You and Scream. She still lives in Chicago with her dog, Buffy, and black cat Salem. She hosts two podcasts, one of which is all about Star Wars called Heroes of the Galaxy. You can follow Alani on Twitter and Instagram.

Succession, baby, as well as the Australian (bisexual) Bachelorette season.

The audiobook for Crier’s War by Nina Varela.

A Love Scorned: What “You” Season 3 Says about Fans’ Obsession with Male Killers
Queer Fear: The “Fear Street” Trilogy Refuses to Bury Its Gays