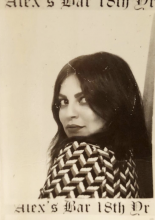 Alex Zaragoza is a freelance journalist and producer covering culture and identity. She was raised on the U.S.-Mexico border, crossing back and forth between Tijuana and San Diego, and self identifies as a border girl. Alex graduated from UC San Diego with a degree in Theater, which she has parlayed into once making a random reference to The Viewpoints in a joke that no one got and so never did that again. Her work has appeared in NPR, O Magazine, Glamour, Vice, Rolling Stone, We Are Mitú/Fierce by Mitú, and others, and she writes a monthly column in San Diego CityBeat. Her car always has at least three semi-empty cans of hot La Croix. Alex is currently based in Los Angeles, so she doesn't have any money. You can follow her on Twitter at @there_she_goz.

It's a very long and varied list. My Spotify Daily Mixes usually have something related to Beyonce/Kelela, Big Star/The Fall, Pulp/The Libertines, Mary J Blige/Luther Vandross' "Never Too Much" because I listened to it five times in a row, and Los Tucanes de Tijuana/Rocio Durcal.

Brooklyn Nine-Nine, The Good Place, The Handmaid's Tale, Desus and Mero, some incarnation of Real Housewives, and old episodes of Parks and Rec.

Inescapable Whiteness: “Vida” and the Gentrification of Boyle Heights