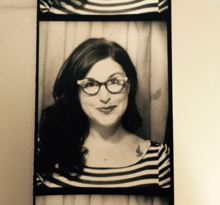 Andi is the cofounder of Bitch Media. A longtime freelance writer and illustrator, Andi's work has appeared in numerous periodicals and newspapers, including Ms., Mother Jones, Utne, BUST, the San Francisco Chronicle, the Women's Review of Books, and Hues. She is a former pop-music columnist for the SF Weekly and the East Bay Express, and also contributed to the anthologies Young Wives' Tales, Secrets and Confidences: The Complicated Truth About Women's Friendships (both from Seal Press), and Howl: A Collection of the Best Contemporary Dog Wit (Crown). She is the coeditor of BitchFest: 10 Years of Cultural Criticism from the Pages of Bitch Magazine, and the author of Feminism and Pop Culture (Seal Press). Her new book on pop culture and the commercial co-optation of feminism, We Were Feminists Once, will be out in May 2016 from PublicAffairs. She speaks frequently on the subject of feminism and the media at various colleges and universities.

Andi graduated from The Colorado College in 1994 with a B.A. in Fine Art that has proved to be more or less useless, though she did use it to secure a job designing rugs for Pottery Barn back in the day. She passes her non-Bitch hours watching television and embroidering portraits of dogs, often simultaneously. Her other interests include drawing, reading, hiking, and eating cheese.

Turnoffs: lip liner, improper punctuation, mansplainers, trend stories, people who say "It is what it is"

Secretly wishes she were: An arts-and-crafts counselor at a summer camp in the mid-1970s

Open-Minded: Rachel Krantz on Nonmonogamy as a Labor of Love
Trading Faces: Our Body Swaps, Ourselves
Written On the Body: For Deborah Copaken, Biology Is a Battlefield
Swiped Out: Nancy Jo Sales Wrote the Book on the Corporate Triumph of Big Dating
Let’s Go to the Tape: Filmmaker Amy Ziering on Bias and Belief in HBO’s “Allen v. Farrow”
Live Through This: HBO’s “Tina” Is a Fitting Final Bow for an Iconic Survivor
Lost and Found: Season 4 of “Search Party” Is the Perfect Pandemic Watch
Dianne Feinstein Unexpectedly Makes the Argument for Term Limits
The Weight of the Word: Ruth Bader Ginsburg’s Complicated Legacy
On the Mend: The Future of Fashion Is Sustainable