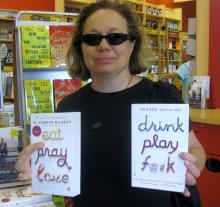 Becky Garrison has to a range of outlets including The Washington Post's On Faith column, The Guardian, Religion Dispatches, The Humanist and American Atheist. Her eight books include Roger Williams' Little Book of Virtues, and Red and Blue God, Black and Blue Church (starred review, Publishers Weekly). Among her current projects include War of the Game, a creative nonfiction account of her late grandfather's exploits coaching football in the Pacific Theater during World War II.

The Misogynist Leader of an Influential Megachurch Sparks Protest