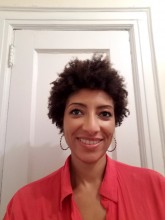 A former Editor at Essence Magazine, where she wrote and edited center-of-the-book features as well as arts and culture articles and helped launched their digital platform, in 2009 she founded Reel Talk Online, a blog dedicated to film reviews, commentary, and features with a focus on marginalized narratives.

She is a member of the Online Film Critics Society, African American Film Critics Association, and the Alliance of Women Film Journalists.

She was also the co-host of "Cinema in Noir," a podcast that specifically highlighted diversity in entertainment across media.

The screenplay for The Shape of Water

The “Claws” Effect: “Good Girls” Is More Than a Guilty Pleasure
The Price of Ownership: “The Girlfriend Experience” Treats Sex Workers With Respect