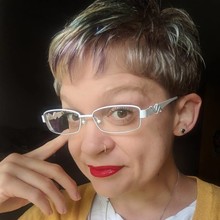 Devon is based in the Cleveland area where the weather changes as quickly as her hair color. She works in higher education in various positions, though one day she hopes to run the place (or at least a department). Passionate about everything from LGBTQ+ issues to feminism, books to mental health, and feminism to music, her voice is often used a little too loud for others’ comfort. With essays on everything from band interviews to female urinary incontinence (we said she had varied interests) published all over the Interwebs, there is very little she won’t write about. On a dare from someone who thought he knew one thing she could never tackle with her words before the 2016 election, she wrote a persuasive article on why Donald Trump would make a good president, which will never see the light of day but did impress the pants off the challenger.

Against Me!, Rise Against, Nothing More, Starset, Breaking Benjamin, The Spice Girls, Shawn Mendes, 90’s hip-hop, The Tracys, Anti-Flag, Zeal & Ardor, In This Moment, Halestorm, Laura Jane Grace and the Devouring Mothers… (it’s almost easier to ask me what I am not listening to)

That list updates daily, but I am on a binge of audiobooks, nonfiction, personal development, and LGBTQ YA novels…