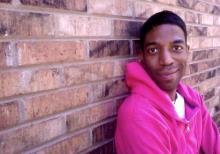 Dennis R. Upkins is a proud Atlanta, Ga. native. A voracious reader, a lifelong geek and a hopeless comic book addict, he knew at an early age that storytelling was his calling.

Upkins regularly critiques and analyzes the representation and portrayal of minorities in comics and media and has served as a contributor for Black Girl Dangerous, Prism Comics, The Nerds of Color, and Comicbookdotcom.

In an effort to help enlighten society about the cultures of the African diaspora and promote a more accurate and positive image, Upkins launched the Black Folks Being Awesome initiative in 2013.

When he’s not out saving the world and/or taking it over in his spare time, Upkins’s hobbies include drawing, modeling, acting, photography, cosplay, rollerblading, martial arts and of course writing.

How Has Transgender Activism Changed in the Past Decade?