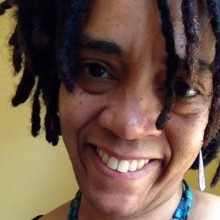 Francesca T. Royster is a Professor of English and Chair of the English Department at DePaul University, where she teaches courses African American Literature and Popular Culture, Black Feminisms, Queer Theory, Shakespeare and Early Modern Literature. She received her PhD in English from University of California, Berkeley in 1995. She is the author of Sounding Like a No-No: Queer Sounds and Eccentric Acts in the Post-Soul Era (University of Michigan Press, 2013), which was awarded honorable mention for the Modern Language Association of America’s William Sanders Scarborough Prize for an Outstanding Scholarly Study of African American Literature and Culture. She is also the author of Becoming Cleopatra: The Shifting Image of an Icon (Palgrave/MacMillan in 2003). Her scholarly work has been published inBiography, Callaloo, The Journal of Narrative Theory, The Journal of Lesbian Studies, Shakespeare Quarterly, Performance Research International, and Women in Performance, among others. She has published creative essays in Slag Glass City, The LA Review of Books, Chicago Literati, The Windy City Times,  and the anthologies Untangling the Knot: Queer Voices on Marriage, Relationships and Identity, and Queer Praxis. She is currently working on a memoir on queer adoption and chosen family, and a scholarly book project on African American country music performers and fans.

Cooking with Queen Sugar, A Dish to Be Savored: Season One Takes on Slavery, Colonialism, and Empire
Listening to Janelle Monáe: Lean Close to Observe the Myriad of Lives, Desires, and Complexities of Black Women