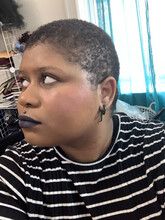 Jourdain Natasha Searles hails from Augusta, Georgia. She has a B.A. in Communications: TV & Cinema from Augusta University and an M.F.A. in Dramatic Writing from New York University’s Tisch School of the Arts. She writes cultural criticism, screenplays, plays and creative nonfiction.

She co-hosts the weekly Bad Romance Podcast with fellow comedian and writer Bronwyn Isaac. Each week, they analyze a bad romantic film as well as provide criticism for the genre as a whole.

Jourdain is a life-long student of film. She created the media criticism website, fishnet cinema. Jourdain is the primary contributor, with guest pieces written exclusively by women and femmes.

She performs stand-up comedy all over New York City. Her monthly stand-up show Madams of the Universe has been at QED Astoria since 2016. She has also performed at Union Hall, Broadway Comedy Club, The PIT, Under St. Marks, The Creek and the Cave and The Footlight among many other venues.

Jourdain is a queer feminist and leftist. She is also visually disabled, which is subject she discusses frequently within her work. With her writing and comedy, she strives to represent women of color in all their complexities.

Shot to Pieces: “Pieces of a Woman” Is a New Take on a Well-Worn Trope
Hustle & Glow: “P-Valley” Puts Black Southern Strippers in the Spotlight
Ms. Jackson If You’re Scary: “Shirley” Is a Biopic in the Form of a Domestic Ghost Story
“Promising Young Woman” Aims to Redeem the Rape-Revenge Tale. Does It?
Forever Your Girls: “Little Women” Is a Film in Conversation with Its Own History
Under Armor: Sex Work, Style, and Survival
Unpoetic Injustice: “Queen & Slim” Treats Its Outlaws as Misguided Political Symbols
Girl Watchers: The Uneasy Female Gaze of “Black Conflux” and “The Other Lamb”
Family Ties: “Hustlers” Promises Crime, but Delivers Matriarchy
In Hot Water: “The Kitchen” Is a Comic-Book Adaptation Whose Diversity Feels Forced