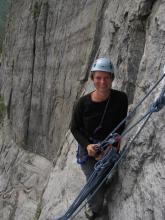 Julie Sedivy is a cognitive scientist and writer who focuses her attention on language, the human mind and how the particulars of these interact with society at large.

She earned a Ph.D. in Linguistics at the University of Rochester in 1997, and then joined the faculty at Brown University for the next twelve years. She has published more than thirty academic papers on language and the mind, as well as the undergraduate textbook Language in Mind: An Introduction to Pscyholinguistics, in which she links psycholinguistic research to beatboxing, legal investigations, scenes from Mad Men, and other ordinary and extraordinary uses of language.

In recent years, she's been spending less time within the academy walls and more time writing for general audiences.  She is the lead author of the popular science book Sold on Language: How Advertisers Talk to You and What This Says About You, and has contributed to publications such as Nautilus, Scientific American, Politico, and Discover. She now holds a position as adjunct associate professor at the University of Calgary, where she supervises students in the departments of Psychology and Linguistics, Languages and Cultures.

She currently lives, works, loves, and plays in Calgary, Alberta. Why? Because mountains.