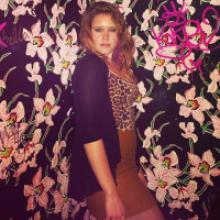 Kait is a freelance journalist living in New York. With an M.A. in journalism from NYU, she’s written for Gotham Magazine, Time Out New York, New York Magazine, DNAinfo New York, and Mic. A native of the great lakes state, she is happiest reciting Shakespeare from the back of a horse.

Movies: Mean Girls, Nymphomaniac Part I, Spirit: Stallion of the Cimarron, The Phantom of the Opera

"Pain, Parties, Work: Sylvia Plath in New York, Summer 1953" by Elizabeth Winder, "Men Explain Things to Me" by Rebecca Solnit, "Black Beauty" by Anna Sewell, "The Woman in White" by Wilkie Collins, "Hamlet" by William Shakespeare, "A Room of One's Own" by Virginia Woolf, "Cloud Nine" by Caryl Churchill, "The Clean House" by Sarah Ruhl, "A Little Princess" by Frances Hodgson Burnett, "Into the Wild" by Jon Krakuaer, "Walden" by Henry David Thoreau, "Leaves of Grass" by Walt Whitman, "The Color Purple" by Alice Walker, "Cold Mountain" by Charles Frazier