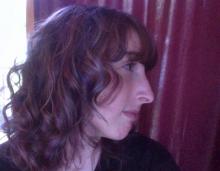 Lucy Merriman is a freelance writer, editor, artist, and ESL tutor currently living in Kent, Ohio. She graduated from Kent State University in 2016 with a degree in English, though before that she tried her hand at everything from Fine Art to Media Production to Theatre. Her previous writing has been publised in Pif, Zetetic Record, [slippage] and Long Weekends. You can find more of her work at www.facebook.com/LucyIsAWriter

She has an adorable, cuddly orange cat named Banksy, and enjoys narrating the rivalry between him and the other orange cats in the neighborhood: Evil Banksy, a Norweigan Forest cat who is perpetually smug, and Tiny Banksy, who is skittish and has been kitten-sized for about a year now.

She's a middle kid. Her younger brother is a musician, and he managed to move to New York City before her, which is just like him. Her older sister is an ultrasound tech, and the two of them have a lot of fun discussing medical science and science-fiction. Also, she introduced Lucy to Philip K Dick's work prior to Middle School by leaving Minority Report on the kitchen counter when Lucy was eleven, so, basically she owes her for life.

Blogs I LIke:
Ape In a Cape (Gail Simone's Blog)
What I'm Watching: