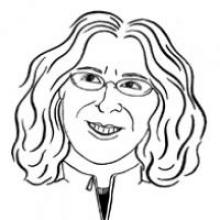 Like a bad penny, Miriam keeps turning up in independent media. She started her career as an editor at Rod Serling's Twilight Zone magazine, where the slush pile consisted mainly of stories that ended "... and then he realized that he was already dead."

She spent the '90s as the features editor for the alternative weekly the San Francisco Bay Guardian, writing and editing about culture, books, food, and other vital pursuits. In addition, she was a contributing editor for the bimonthly comprehensive zine compendium Factsheet Five. This has left her with 20,000 zines in her basement.

Her freelance book reviews have appeared in the San Francisco Chronicle, the Chicago Tribune, and the Portland Oregonian. She also blogs about food media for Chow.com.

Secretly wishes she were a: writer

Favorite Books: My Year of Meats, anything by Haven Kimmel, Sacred Games