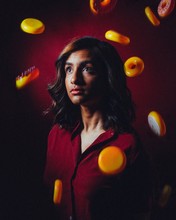 Rekha Shankar is the former head writer/performer for CollegeHumor’s Hardly Working series. She was a guest writer on the Astronomy Club Netflix sketch series, plays the role of Gaya the Director in Between Two Ferns: The Movie, and is an ensemble player in the upcoming Netflix sketch show Aunty Donna’s House (premiering in 2020). She is an improviser at the Upright Citizens Brigade Theatre L.A. She is also the writer/creator of Hustle, which was an Official Selection at the 2016 New York Television Festival. Her other pilot, Queens, advanced to the second round in the Comedy Teleplay Pilot category at the 2018 Austin Film Festival.

Ongoing credits include the New Yorker, ClickHole, Reductress, Decoded and Braless on MTV News, and being a national punner. One of her New Yorker pieces about how recipes have way too much backstory up top even went “viral.” She has also written for a Hari Kondabolu pilot (TruTV) and a Mike Kelton pilot (MTV), and improvised for UCBT NY’s Harold Night and UCB’s Touring Company.