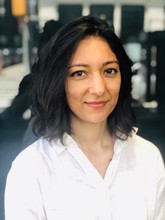 Born in Mumbai, India, Sanjna N. Singh came to the US at 18 for college, graduating magna cum laude from Bryn Mawr College in 2000. She has worked in New York City for over fifteen years, at HBO, and as a reality television producer for shows such as Mob Wives, Storm Chasers, The Detonators, Dual Survival, Be Good Johnny Weir and The Killing Fields. Her writing has been published in numerous publications including the New York Times, The Guardian, Vox and Bitch. Her documentary Out of Status, which followed Muslim families detained or deported on post 9/11 immigration sweeps, was nominated for Amnesty International’s Human Rights Award and broadcast on Channel 4 (UK). She is currently getting her MFA in Creative Writing at the University of Iowa’s Nonfiction Writers Program. She lives in Iowa City with a needy houseplant and will pet big dogs on the street.

The Magicians, while waiting for Patrick Rothfuss to release the third book in his Kingkiller Chronicle.

(Un)happily Ever After?: TV Treats Arranged Marriage as an Archaic Indian Custom. It’s Not.