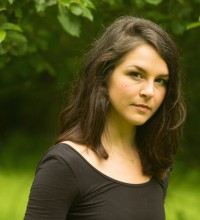 Sara Rauch is a writer and editor based in Easthampton, MA.

Her debut short story collection, What Shines from It, will be published by Alternating Current Press in 2018.

She holds an MFA in Fiction from Pacific University. In 2012, she founded the literary journal, Cactus Heart, where she served as Fiction and Managing Editor for four years.

She is currently working on a collection of lyric essays.

Oh, the Places Rage Will Take You: “Last Woman Standing” Reckons with Comedy’s Predators
Curses and Kitchens: “Jell-O Girls” Looks at the Secret, Sexist History of America’s Classic Dessert
Resistance Narratives: Lidia Yuknavitch on Joan of Arc, Bodies, and Reimagining the Love Story
Storytelling Will Spark the Overthrow: A Review of Lidia Yuknavitch’s “The Book of Joan”