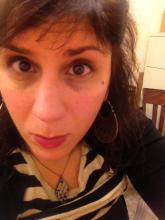 Sara Zia is a curator of film, visual art and new media and for over a decade has produced film screenings and exhibits in the Philadelphia area. She has worked as a consultant with Independent Television Service (ITVS) and with individual independent filmmakers on their engagement and outreach campaigns. Currently, she works as a Social Media Specialist at American Friends Service Committee (AFSC). A MFA graduate of Temple University, her own short films have screened internationally and been awarded grants from Chicken & Egg Pictures, Rooftop Films and the Leeway Foundation. In Spring of 2015 she released her first web series, Bailout, which she wrote and directed.