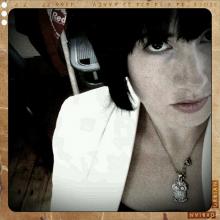 I run the website for GRITtv with Laura Flanders, an independent, progressive television show, and I am deputy editor at GlobalComment.com, a site which like its name implies, carries news and commentary from all over the world. I've written about Twitter and women in the Tea Party for Bitch, and my work has appeared in The Nation, The American Prospect, Truthout.org, and more.

In addition to the heavy political stuff, I've written about comics for Bust and The Awl, as well as Newsarama.com and Comic Foundry magazine.

Most importantly for the moment, though, I'm a music junkie. I've written about music for lots of places, including Billboard, but right now I'm writing about it for you.

2666, George Orwell's collected essays, and a good chunk of the Internet.