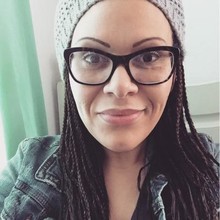 Tasha Fierce is a queer Black feminist writer born and raised in the occupied Tongva territory known as Los Angeles. Their work has appeared in the anthologies White Riot: Punk Rock and the Politics of Race and Hot & Heavy: Fierce Fat Girls on Life, Love, and Fashion, as well as in publications such as Bitch Planet, EBONY.com, Clutch, Jezebel, The Huffington Post, Racialicious, and Corset Magazine. They tweet as @tashajfierce, and write at tashafierce.com.