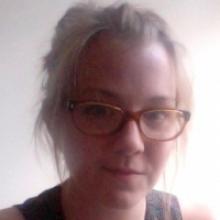 I'm a freelance writer and I live on the outskirts of Philadelphia, right where I grew up. I write book reviews and arts journalism for a variety of newspapers and magazines, and I've been contributing to Bitch for a few years now. I'm also a longtime zinester, which is where The La-La Theory name came from — it's what I call my armchair linguist zine. My first book, a memoir called White Elephants, is about yard sales and love, and was published by Microcosm in June 2012. You can read more of my writing on my website and keep up with my nonsense on my blog.

Also, two days ago Joe found a record in a thrift store in Virginia Beach by an 80s new wave group called the Vels. We'd never heard of them so we did some research. Turns out they're from Philly, which is always exciting, and the lady, Alice Desoto (aka Alice Cohen), now lives in Brookyln, where she still makes awesome gothy music. We watched some of her videos and then hung the record cover in our 80s-themed bathroom. It's been fun.

At the moment I'm really looking forward to reading Tessa Hadley's new novel, The Past. Here's my reading list on goodreads. I'm always looking for something good to read so if you want to talk books send me a note.

Overdressed: Elizabeth Cline on Fast Fashion, Overconsumption, and What We Can Do About It