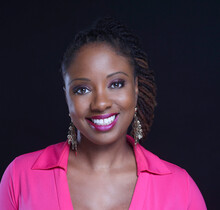 Professor of Women's Studies and Writer

Treva B Lindsey is an Associate Professor at The Ohio State University. Her research and teaching interests include African American women’s history, Black popular and expressive culture, Black feminism(s), hip hop studies, critical race and gender theory, and sexual politics. Her first book, Colored No More: Reinventing Black Womanhood in Washington D.C was a Choice 2017 “Outstanding Academic Title.” She is a 2020-2021 ACLS/Mellon Scholars and Society Fellow. She was the inaugural Equity for Women and Girls of Color Fellow at Harvard University (2016-2017).  She is currently completing her next book, America Goddam: Violence, Black Women, and The Struggle for Justice (University of California Press 2022). She is the recipient of several awards and fellowships. She has written for and contributed to outlets such as Time, CNN, Al Jazeera, BET, Complex, Vox, The Root, Huffington Post, PopSugar, Billboard, Bustle, Teen Vogue, Grazia UK, The Grio, The Washington Post, Women’s Media Center, Zora, and Cosmopolitan.