Moving On – Trailer 1 – Geeta's Guide to Moving On

Geeta’s Guide To Moving On

Geeta Gidwani (Puja Mohindra) is in a stage of life that many of us can relate to: trying to find her bearings in the heartbreaking cesspit of a breakup. Her breakup is especially dramatic because her fiancé and partner of 10 years, Dani (Andy Nagraj), delivers the bad news just hours before their engagement party. Geeta’s life immediately descends into chaos: Who is she without the man she moved to Chicago for? Will she ever be able to get out of bed without her family dragging her out of it? The web series Geeta’s Guide to Moving On is a portrait of a woman facing these obstacles and wobbling toward recovery.

Those who’ve had their fill of Eat Pray Love–esque narratives that center white women who overcome emotional pain by exploring—and exoticizing—other cultures will be happy to know that Geeta’s characters are people of color, adding a refreshing element to familiar breakup and self-discovery plotlines. Women of color are hardly ever given the opportunity to experience growth onscreen, and Geeta’s Guide to Moving On story closes that gap by excluding whiteness from the narrative altogether. 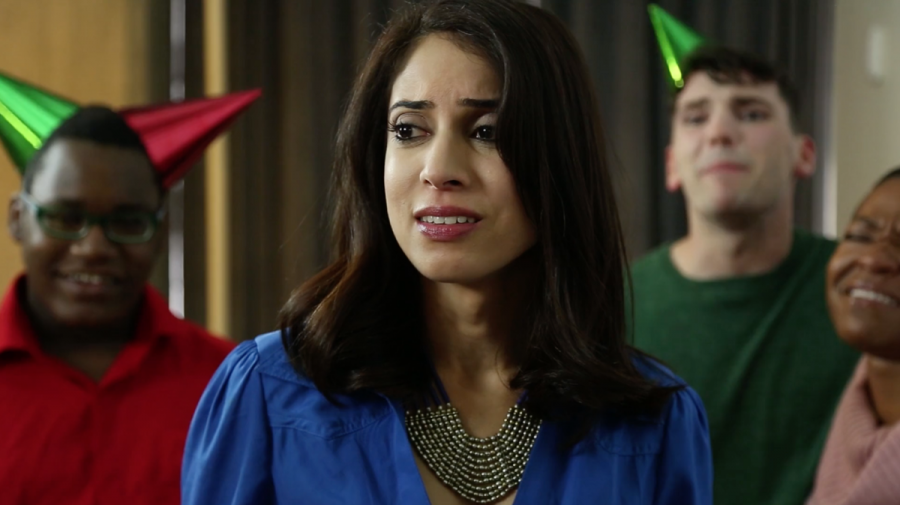 Geeta’s story is told through eight-minute episodes that feature her support network: There’s her South Asian family, who drag her to a divorce support group in the absence of a more appropriate type of free therapy; her aunties, who provide biting and surprisingly tech-savvy commentary about Geeta’s life; and her best friend, Akua (Danielle Pinnock), an athletic fat black woman who never hesitates to push Geeta toward her true potential. In a time when friendships between women of color from different ethnicities are rarely portrayed onscreen. Geeta’s friendship with Akua is sweet, sometimes full of tough love, but—most important—a necessary challenge to the tokenism to which women of color are usually subjected.

When Geeta moves in with her parents post-breakup, they’re concerned and intrusive—as South Asian parents often are—and suffer alongside her, actively trying to help her get over Dani. The meddlesome-but-loving pair offer an authentic and welcome depiction of South Asian parents, and their relationship to Geeta shows a parent-daughter dynamic that is, again, a marked contrast to the independent-white-girl-finding-her-way narrative. Rather than walking away from everything to “find herself,” Geeta finds solace and salvation in her support network. Their reassurance—even when Geeta is in deep denial—is heartwarming.

Each episode is prefaced with a lesson on how to move on, each one more relatable than the next. From the introductory “It sucks and that’s okay” to Geeta’s flailing attempt, in a later episode, to appear happy and healthy when it becomes clear Dani won’t come back to her, the web series explores the agony of being lost in your 20s, portraying the ensuing confusion and need to feel anything but despair and emphasizing the importance of gentleness and human connection in hard times. The typical onscreen exoticization of brown women means that narratives about their lives are generally about being othered, rather than being human. Geeta’s Guide to Moving On gives space to a woman of color to simply be, with weaknesses, strengths, and the ability to express them without the stereotyping of the white gaze.

All episodes are now streaming, so there are myriad paths the story can take (I am curious to see what Geeta will do about her passion for dancing now that her life has changed), but Geeta’s Guide to Moving On gives us a necessary twist on a familiar story.