Fat Girls Deserve Fairytales TooThe Rejection of Tropes in “This Is Just My Face: Try Not To Stare”

Fat girls are rarely granted space in fairytales. We’re told through the five percent of television characters that are plus-size and the warped media depictions of fat women as asexual and weight-obsessed that happy endings are reserved for thin women. The “tragic fat girl” trope is trotted out again and again in media to remind plus-size women that we’ll never be content until we’re in the Body Mass Index’s “normal weight” category.

In her honest memoir, This Is Just My Face: Try Not to Stare, Gabourey Sidibe completely upends and rewrites this fatphobic script. Over the course of 18 essays, the Academy Award-nominated actress presents the subversive notion that plus-size women, especially plus-size Black women, are enough. We’re deserving of love, especially in a weight-biased culture that makes assumptions about the health and worthiness of our bodies. Whether that’s detailing how she landed her title role in Precious or explaining how she’s honed her fashion instincts by hiring a plus-size stylist who understands her body, Sidibe is full of the happiness we should all be guaranteed—no matter our size.

However, Sidibe’s journey to happiness hasn’t been a crystal stair. She’s born to an abusive Sengalese father who marries her Black American mother to earn American citizenship. Her father wanted Sidibe and her brother, Ahmed, to fear him because “he saw fear as a sign of respect.” His abrasive approach to parenting was designed to break Sidibe and force her into subservience. She fought instead. Her mother did too—after Sidibe’s father married his cousin, had a child with her, and moved her to the US.

While she could’ve written a self-help book, as many celebrities are wont to do, Sidibe recognized that sharing her tumultuous life journey would be more impactful. She delves deep into her own demons throughout the book. For instance, Sidibe explores the impact an eating disorder, panic attacks, and depression had on her in various periods of her life. After her parents separated, Sidibe moved with her mother and her brother to a single bedroom in her aunt’s three-story home. Her mother then left her job as a teacher’s aide to sing to passengers boarding NYC’s subway system. The sudden uprooting induced Sidibe’s initial panic attacks.

“That was the summer my panic attacks started,” she wrote. “I remember crying and complaining that I couldn’t breathe. It’s easy to see now that with my parents’ separation, my new stepmom and brother, moving into my aunt Dorothy’s house, my fireworks accident, the antibiotics I had to take for my foot—along with the diet pills—life was out of control for me.”

She continued to battle panic attacks throughout high school and college, though she eventually sought therapy and learned to cope with triggers. Sidibe’s honesty is refreshing. The cultural idea that tragedy and harm builds character isn’t present within her book. She doesn’t hide from her monsters. Instead, she boldly uses her life as an example for other people who feel inadequate about their lives and their bodies.

Sidibe’s confidence radiates throughout the book, but the moments when she’s honest about her internal dialogue resonate the most. For instance, as she ponders whether or not to undergo weight loss surgery, Sidibe confesses that she still struggles to love her body.

“My body sometimes feels like a tragedy, but I’m trying very hard to change my mind about that,” she wrote. “This is my body. It’s going to be with me forever. For all the ways it’s failed me, it’s come through for me a million times more.”

As body positivity has become a mainstream movement, its actual roots in fat acceptance have been diluted in favor of the “all bodies are good bodies” mantra. While all bodies are indeed good bodies, fat acceptance fought for Sidibe—and all plus-size people—to unapologetically exist in thin spaces, like Hollywood. Fat acceptance pushes for the erasure of weight stigma so that plus-size people can live freely without fear of discrimination. Sidibe knows firsthand the judgments made about fat people.

“I can’t tell you how many times I had to hear, ‘I have to admit something. I thought that fat people were stupid, I thought they were lazy, and I thought they smelled bad. But meeting you, I realize that you’re a normal person like me.” she wrote. “…What the fuck, right?”

Those assumptions undergird the importance of This Is Just My Face. The Empire actress has long been a model for plus-size women seeking happiness in a fatphobic world designed to shame us. She doubles down on that commitment in her memoir. Ultimately, self-love is Sidibe’s guiding principle. No matter what obstacles she encounters—an eating disorder, an abusive father, feeling inadequate while walking red carpets with thin white starlets, a magazine editor calling her a “fat Black bitch”—affirming herself has been central to her journey.

Self-love should be at the center of all our journeys as well. Fat girls deserve happy endings—period. 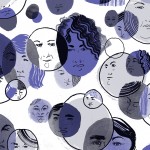